Icons is a brand-new, eight-part history series for BBC Two which celebrates the achievements of some of the greatest figures of the 20th century. It will ask you, the audience, to vote for your favourites and ultimately you’ll decide who is the greatest icon of them all.

Seven well-known faces will each front an hour-long documentary arguing the case for four people from a different field of human excellence; fields our celebrity advocates are passionate about. At the end of each documentary viewers will be able to vote for their favourite.

The icon who wins the public vote in each category will then go through to a live final on the 5th of February 2019. All the celebrity advocates will return to fight their icon’s case, and that of the field they triumphed in. Viewers will be able to vote once again to decide who is ultimately the greatest figure of the 20th century.

Seven programmes will be devoted to seven different categories of human excellence. In each programme, a celebrity advocate will introduce you to four extraordinary…

Sir Trevor McDonald will state the case for leaders, Dermot O’Leary will champion explorers and Chris Packham is flying the flag for scientists. Hollywood great Kathleen Turner will introduce you to the entertainers, it’s Sanjeev Bhaskar on activists, Clare Balding on sports stars, and Lily Cole on artists & writers. To find out more about the advocates and their passion for their category explore our Meet the Advocates page.

The series starts on the 8th of January 2019 with two programmes airing each week on BBC Two. The episode featuring the final category broadcasts on Tuesday 29th of January. The live final will be on the 5th of February.

Voting begins at the end of each programme and the vote is open until 4pm the next day. To vote please go to www.bbc.co.uk/icons where you will also find Terms and Privacy Notice. To find out more about the individual icons explore our Meet the Icons page.

How will the Category Winners Be Announced

The winners of the two weekly categories will be announced live on air by The One Show on Thursday in week one, and Wednesdays in weeks two, three and four. The winners will subsequently be featured on the Icons website and on social media.

All seven finalists will go through to a grand live final on the 5th of February on BBC Two at 9pm, when all the advocates will come together to argue the case for their chosen icon. Ultimately it’s up to you to decide who is the greatest icon of them all. This will be announced live on air at the end of the final.

Voting in the Final

There will be two ways to vote in the final: via the website www.bbc.co.uk/icons where you will find Terms and Privacy Notice or by telephone. Details of how to vote by telephone will be outlined in the programme.

How the Featured Icons Were Chosen

Longlists were drawn up for each category. 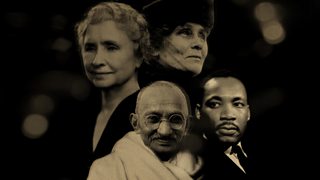 The criteria were: positive achievement and legacy, a degree of recognition for a British audience, and a spread of individuals across the century. Expert panels then met to decide on a shortlist of four for each category.

These are the four that are profiled in the seven documentaries leading up to the final.

The starting point for this was a web based cultural mapping tool developed by the Massachusetts Institute of Technology media lab, drawing on the prominence of individuals on the internet. Initial lists generated with the help of the tool were then sent to academic experts to assess against the agreed criteria.

Expert panels were then asked to meet and discuss the longlists and from them draw up shortlists of four individuals in each category. The panels consisted of six members with specialist experience in the category under discussion: practioners, academics, broadcasters and journalists. They were overseen by a chair person, with outstanding expertise in the featured field, who helped direct and marshal the discussions and to ensure that the panel reached an agreement.

The panels were asked to think about legacy, achievement, impact, influence, contribution to the field, and profile or iconic status. They were asked to suggest people from across the entirety of the 20th century, rather than putting forward a shortlist of icons purely from the recent past.

See the shortlisting panels in the drop downs below

To find out who is on the shortlists and explore their achievements, visit our Meet the Icons page.