Filming a volcano eruption from the air 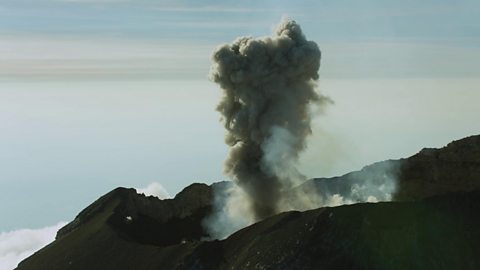 A breathtaking view of Mexico's mountains, including its most active volcano erupting.

Filming volcanoes is akin to the privilege of watching the earth give birth.

Popocatépetl commands respect. As Mexico’s most active volcano, “Popo” rises to 5,426 metres. On a clear day, the perfectly shaped cone dominates the landscape and can easily be viewed from the sprawling Mexico City metropolis. However “Popo” is not alone, and shares the foreboding landscape with the Iztaccihuatl volcano. In Aztec mythology, the volcanoes were once humans who were deeply in love. Of course, there’s much more to the story. Popocatépetl, a once mighty warrior, presides over his princess Iztaccihuatl, and forever reminds us of his presence by spewing ash.

Volcanoes are simply amazing. The magma that bubbles up is our direct connection to the center of the earth, and that lava is what creates new land. Filming volcanoes is akin to the privilege of watching the earth give birth. I have filmed volcanoes in Alaska, Hawaii, Chile, Taiwan, and Oregon. Most of the volcanoes are either dormant, or the slow oozing types like Kilauea on the Big Island of Hawaii. As photographers, we all have the proverbial “bucket list” of locations or natural phenomena that we want to film.

Accepting an aerial project from the BBC is always rewarding if not daunting. The challenge is to bring a sense of scale with the aerial view, yet maintain a sense of intimacy to connect the viewer to the earth. Many of our challenges are logistical… finding the right helicopter and skilled pilots, and waiting for weather. However, the key factor for filming a natural phenomena requires immense patience, and a healthy dose of good luck.

Ron Chapple used a gyrostabilized gimbal at 18,000 feet altitude to film into the caldera.

We arrived in Mexico City and rigged the helicopter with a gyro-stabilised system, a 6K camera, and a 30-300mm lens. While our film pilots, one from the USA and one from Mexico, worked on their pre-flight checks and setting up the oxygen systems, I checked over all of the gear. Aerial filming is an investment and every minute in the air is equivalent to a nice meal at a fancy restaurant! Aerials bring that sense of place to any film as the director has a clear vision for “establishing” the amazing landscape.

Unlike commercial airplanes, helicopters are not pressurised so we all needed to be connected to an oxygen system and wearing masks. Operating above 5,000 meters requires careful planning and a meticulous safety protocol. At that altitude, oxygen deprivation affects both jet engines and humans alike. Every ounce of horsepower is needed for the blades to lift us through the thin air. The pilots calculate our fuel load and weights. We have less than 3 hours of flight time to complete our mission, and just getting to and from Popocatépetl burns up an hour of fuel. We were rigged within a couple of hours, and ready to fly.

As we drove to the airport early the next morning, there was no sign of Popocatépetl or Iztaccihuatl on the horizon. For the next 4 days, the great warrior and his beautiful princess were hidden behind walls of clouds and haze. Every morning our crew awoke pre-dawn, the pilots checked the weather and I looked up to scan for the faintest glimmer of a star and clear skies. After 5 days we still hadn't filmed the volcanoes. Our conditions needed to be perfect. Finally, we saw the silhouette of the volcanoes on our pre-dawn taxi to the airport. I checked the camera systems while the pilots completed the pre-flight check.

The volcano was filmed with a 30-300mm Cinema lens to provide both close-up and wide angle footage.

In Mexico, flight regulations restrict helicopters from flying before sunrise or after sunset. As the whine of the turbine engine intensifies, our pilots call air traffic control tower for pre-clearance, and we all watch the clock for that magic minute when we can lift. Seeing the volcanoes clearly in the distance lifts our spirits as the helicopter climbs to ever increasing heights. As I frame up Popocatépetl with Iztaccihuatl in the foreground, the might warrior spews forth a massive plume of ash silhouetted by the warmth of the sunrise. Soon, we are at the rim of Popo, and looking down into the crater. Continual steam rises from the caldera. We slowly orbit, and I record both wide and close-up views. We have been flying for 90 minutes now, and all eyes stay focused on the crater. We know that Popo could announce his presence at any moment, or never again. We are in race against time… the will of Popocatépetl to exhale another massive breath of ash versus our diminishing fuel. With just minutes left before we need to return to the airport, our patience is rewarded. What starts as a small black cloud continues to build and build, and a massive column of ash rises into the sky. My eyes scan the recording deck and camera controls… yes I am recording, yes the lens is in focus, yes the exposure is correct.

Popocatépetl has spoken with his powerful plume of ash rising into the sky, and we are admonished to leave his presence. And for my bucket list, well there is one less item!

How we made the series