The power of desire: Allen Jones at the RA

Pop art pioneer Allen Jones was the subject last year of a career-spanning Royal Academy retrospective, which reignited the debate that his work is demeaning to women. BBC Arts took a tour of the exhibition with the artist as guide. 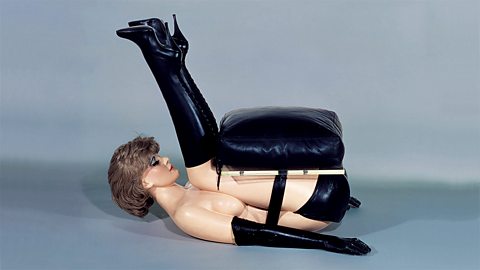 Inside the Royal Academy retrospective with the controversial British Pop Artist.

Since his infamous London exhibition at Tooth's Gallery in 1970 featured the series of works Women as Furniture, British pop artist Allen Jones has had to get used to being derided.

Forty five years on from the debut showing of artworks Chair, Table and Hat Stand, the debate has yet to die down.

One of the works, Chair, even had acid thrown over it in 1986

These life-sized, submissive, fibreglass female figures dressed in fetish wear were decried in the '70s by feminists – and others – as being demeaning to women. One of the works, Chair, even had acid thrown over it when shown at Tate Britain in 1986.

Their highly sexualised appearance became the focus of academic debate and prompted the exploration of the fetishized image of women and the male gaze in general.

Unlike other British exhibitors, who for years have largely shied away from showing Jones' work, London's Royal Academy reignited the debate by mounting a career-spanning retrospective in 2014.

More coolly appraised, Jones can be seen as a deft draughtsman and a consummate painter with an eye for pop culture and the glossy artifice of graphic design.

Jones studied at the Royal College of Art along with friends David Hockney, Patrick Caulfield and RB Kitaj, and - in a portent of things to come - was kicked out after a year for what he claimed was a minor infraction of College rules.

It seems the mild-mannered artist won't be allowed to escape the misdeeds of his youth or, of course, the furore surrounding his fantastical, stilettoed ladies. While these events may have been unforeseen, he's not averse to causing a stir, as he explains:

"It was about offending the canons of art, not about offending individuals. I thought the whole success of Pop Art lay in a return to representing the figure without the baggage of fine art - so that people would have to make up their own minds whether it was art or not."

"It was the familiarity of the Pop Art image that democratised the way people look at art."

The way we look at Jones now may be as divisive as ever.

The original version of this article was published in November 2014, to coincide with the opening of Jones's Royal Academy retrospective.

It was unfortunate for me that I produced the perfect image for them to show how women were being objectified. Smoke bombs... were thrown at my ICA show in 1978… It was tough stuff and I wasn't expecting it
Allen Jones, 2007