Can your food change your mood?

We instinctively know there is a link between food and mood. (How often have you reached for a bar of chocolate when feeling down for example? It’s called comfort food for a reason!) 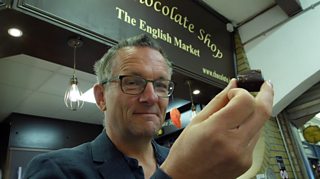 But we wanted to know whether there is a more scientific link between what we eat, and our mental health.

So Michael Mosley travelled to the University of Cork, in the Republic of Ireland, to meet a team researching the links between depression, anxiety, and what you eat – and whether certain foods can make you feel better. Led by Professors Ted Dinan and John Cryan, this team is focusing its research on the microbiome – the vast population of bacteria that live in our gut.

The team in Cork are interested in what certain foods do to the trillions of microbes in our intestines, which in turn may interact with our brain through our bloodstream. The team have labelled foods which are believed to have a positive mental health benefit, “psychobiotic”.

The work at Cork builds on decades of research elsewhere. These studies have shown that some of the “good” bacteria in our gut can produce neurotransmitters – chemicals that convey messages in our brain and nervous system. This underpins the theory that our diet – what we actually put in our gut – can influence our mental wellbeing.

We wanted to find out whether a “psychobiotic diet”, as devised by nutritionist Dr Kirsten Bering Harold and the Cork team, could affect people’s mood in a real-world setting. So we recruited eight healthy volunteers to take part in a study. They were split into two groups – a control group who would continue on their regular diet, and a second group who were put on the psychobiotic diet.

Key to the psychobiotic diet were two different kinds of food:

Prebiotics – foods rich in fibre that are known to feed the healthy bacteria in our gut. These foods include onions, leeks, and berries.

We took stool samples from our volunteers in order to find out how much variety there was in their gut bacteria, and we assessed their mental well-being using a mood questionnaire. We also wanted to see how they responded to stress by measuring the electrical conductivity of their skin.

Four weeks later, the volunteers gathered in the University to hear the results. Firstly, those on the psychobiotic diet saw a dramatic change in the composition of their microbiome, with a rise in bacteria considered healthy and a reduction in “bad” bacteria. In addition, those on the diet reported significantly lower levels of stress compared to the control group when measured by the mood questionnaire. And on the skin conductivity test, the dieters’ stress response fell by 31% on average - a significant reduction.

This was a small study, and larger cohorts are needed to provide evidence of a definitive, causal link between the bacteria in our gut and our mental wellbeing. But these results are encouraging, and suggest that our food really can influence our mood.