Eight things you need to know before buying an electric car

Sliced Bread is back to see if more wonder products that claim to make us healthier, happier and greener really stand up to scrutiny.

In a motoring-themed episode, Greg Foot takes on a challenge from his producer, Julian Paszkiewicz, to work out whether it's worth him switching his old petrol-guzzling car for a shiny new electric vehicle, or EV. Will this make him greener and help save him money?

But what do drivers need to bear in mind if they're also considering making that leap to electric? 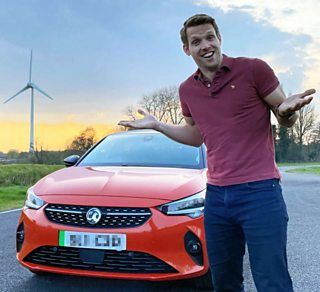 Listen to the Electric Cars episode of Sliced Bread in full

The government announced in 2020 that there would be a ban on the sale of new petrol and diesel cars from 2030. This doesn't mean that anyone who is driving a working petrol car has to swap it for an EV by this date, but anyone who wants a brand new car will need to make the switch after this date.

2. You can potentially save money by driving an electric car

Battery electrochemist Euan Turk says that he was travelling 12,000 miles a year in his EV and saving "a significant sum of money, well into four figures, every year".

He adds: "If you're factoring in the residual value of the car in what you would get if you sold it after however many years, that break-even point between buying a petrol car outright and buying an electric car outright is probably a couple of years for quite a lot of people, and then you're just laughing your way to the bank beyond that."

3. But low mileage drivers could be greener and better off sticking with their petrol cars

Freelance motoring journalist Vicky Parrot is an advocate for EVs, however, she says that it could actually be greener to keep an old petrol car on the road "even if it's only doing 30 miles per gallon".

"It's not just about the fuel you burn," Parrot explains, "it's also about the energy involved in recycling the car. It's crass to just scrap completely usable petrol and diesel cars. If you only do 5,000 miles a year – which plenty of people do – then potentially you're not going to make up the cost of a new EV in your fuel savings."

New EVs can cost thousands more to buy than their petrol siblings. Home charging can mean you can save money per mile than the cost of unleaded. Greg worked out that there is a break-even point but it will take a while before you start offsetting the extra upfront cost from what you don't pay at the pump.

4. Even before you drive one, an EV has made a massive environmental impact

Mike Berners-Lee explains that the smaller, electronic components of an EV, such as microchips "could have a much bigger carbon footprint than you'd assume".

Vauxhall told us they have data on the carbon footprints on their cars but did not want to share it.

When Greg drives his electric Corsa, he notes: "Fewer than one in three of the miles that I was driving in the EV were powered by truly renewable energy, because on that day - which I think was a pretty fair representation of what the energy mix often looks like - nearly 40% of UK electricity was coming from fossil fuels." 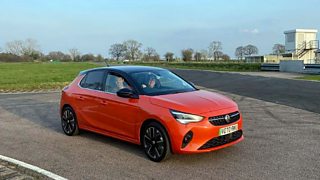 Greg drove an electric car around a track in Lichfield, Staffordshire

Or as, Julian points out: "Although it's got no exhaust pipe, the chances are the electricity that's gone in there has been made from the result of burning things."

6. …but sooner or later, the benefits of EVs do kick in

Despite the fact that a large proportion of the electricity used by an EV will still come from fossil fuels, Greg notes that "each of those miles is significantly cleaner than driving them in a petrol car by a factor of five or six".

However there's also the carbon footprint of making an electric car in the first place to take into account. The good news is that it is possible to offset that through those cleaner miles. Greg worked out that breakeven point in his electric Corsa. However, only two car makers, Volvo and Polestar have published data on the number of miles you’d have to drive one their EVs offset the carbon footprint from making it.

7. The experts give the thumbs up to EVs, but to differing degrees

Says journalist Vicky: "I don't think it's reasonable to say everyone must buy an EV in the same way that I don't think it's the green thing to just go out and scrap loads of old cars that are perfectly functioning, but I would say, with a few caveats, EVs are the best thing since sliced bread."

8. Energy and petrol prices can change

On the day after Greg's test, the government cut fuel duty. Just over a week later, the Ofgem energy price cap came into force which raised electricity prices for 22 million households. These affected Greg’s calculations on how much Julian would save per mile by going electric.

So will Julian switch? You can find out what Greg's test results are and Julian's reaction by listening here.

The information contained in this article was correct at the time of broadcast on 7 April, 2022.