Keeping up with caribou

During the summer in Alaska the sunlight never seems to leave, which for a wildlife cameraman is what you dream of, but it also makes for a very bizarre time.

I saw a grizzly bear, about 50 meters away. He was big old boy, with a beautiful golden coat shimmering in the light

Producer Alex Lanchester and I were there to film caribou: for four weeks we trudged through the tundra trying to keep up with this tenacious creature. It was hard trying to keep up with their relentless roaming. We had all-terrain vehicles, which were robust and fast, but we could only stick to the pathways made by gold-rush workers in the past, which made keeping up with the caribou very difficult. Also, the reason they were migrating in the first place was, in part, to get away from the mass of mosquitos. It’s tricky, whilst you’re looking down a lens attempting to keep a caribou in frame, knowing you’re being eaten alive by these little critters and you daren’t take your hand off the lens to give them a good swatting.

But not only did we have the mosquitoes to deal with: we also had bears. We saw grizzly bears pretty much every other day, and some a bit closer than we would have liked.

We had moved up to higher ground. The brush had fallen away some 100 meters below so we now were very exposed, with only the echoing little voices of ground squirrels, trying their hardest to give away our location. We sat on the hillside with the amazing panoramic view of Alaska as a backdrop behind us, pondering on how I was going to approach a little group of Caribou without them spotting me. We had already seen wolves in the area a couple of days beforehand so the Caribou were really on edge and super vigilant.

By the time I got close enough there were only 10 left in that group. They have a fantastic sense of smell, so I had to be really careful not to give myself away. The wind was also changing direction all the time, so trying to approach downwind was always going to be down to luck.

I used the landscape to my advantage and scampered round some rocks to get to a good vantage point, filming a little on my way. The aim was to capture the group heading to a snowy patch to get away from the mosquitoes. I got the action I needed: now for the close ups. But then the wind swept round behind me. The Caribou twitched their noses and the last remaining 5 all stood up and moved off. The game was over for the day.

Feeling a little beaten, we gathered up the kit and trudged off back down the hillside, with the little ground squirrels still chirping in our direction.

Time in Alaska’s summer seems very peculiar: the sun passes along the horizon instead of going down, yet all the animals behave as if it’s dusk. We had spent much of the day tracking the Caribou and it was getting late. We were heading dangerously into the ‘predator hour’. It had taken us 3 hours to get up there - we knew the walk down would be quicker but we still had the thick bush to contend with. We made our way back towards the vehicles, where our guide would be waiting for us. After an hour walking down we came to a swamp area – and I saw a grizzly bear, about 50 meters away. He was big old boy, with a beautiful golden coat shimmering in the light, his head down, foraging for food. So we did a quick about-turn and had to go the longer way round after all.

He may not have seen us, but he had definitely smelt us. We made our way through the bush, which seemed thicker and more uninviting at every step. Typically everything that could snag up did. Whilst the bush was hard to get through, it gave my brain something to focus on instead of the thought of a grizzly bear looming around the next corner.

We made it out a little scratched up and with very soggy boots but at least we could now see more than a one-meter radius. A grizzly bear would be much faster over this terrain than Alex or I would be, so it was something of a relief to be back at the vehicles.

My time in Alaska was a challenge: at many points it seemed like we were never going to complete the sequence of the caribou, but in the end we did. I came away feeling we’d achieved what we set out for, even if we’d been a little tested by the tundra. 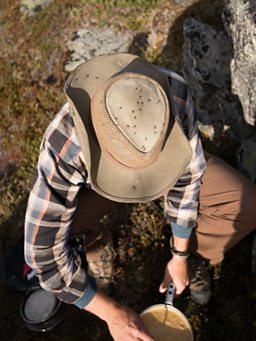 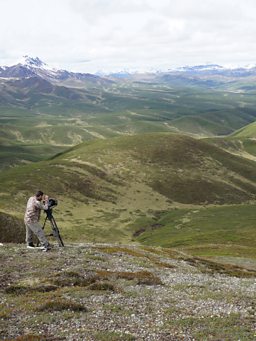