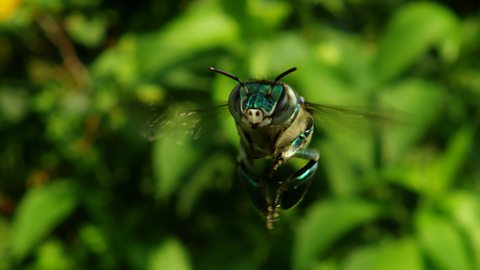 Orchid bees make their own cologne

When I saw images of these stunning animals, in their shining green armour, I really wanted to feature them in the programme.

For the Mountains episode we wanted to tell stories on a grand and small scale that would demonstrate the remarkable diversity of Mexico’s mountain ranges.

One of our locations, Sierra Gorda, offered us a wealth of potential wildlife stories, so we relied on photographer and conservationist, Roberto Pedraza, as our guide. His family began the NGO Grupo Ecológico Sierra Gorda, to protect this unique region and he spends his days roaming its vast patchwork of habitats. His photographs, taken over several years, revealed that Sierra Gorda really is a secret garden for orchids. There are over 1,200 species of orchid in Mexico, with many only found at high altitudes, so this seemed like an important element of Mexico’s mountain story.

Then I read about the amazing, mutualistic relationship orchids have with the orchid bee. When I saw images of these stunning animals, in their shining green armour, I really wanted to feature them in the programme. Roberto sent me a photograph of these same bees on a Stanhopea orchid in the garden of his house in Sierra Gorda and the pieces began to fall into place.

The brushes on an orchid bee’s feet, captured with a macro lens.

Unfortunately, Stanhopea orchids bloom for just a few days each year, so the chance of us actually finding and filming them in the vast forests of the Sierra Gorda was nigh on impossible. What’s more, macro filming depends on being able to control conditions, like light, and this would be a big challenge in a remote, forest location. So, we turned to the expert team at Vallarta Botanical Gardens who were able to find orchid experts who could provide several specimens of Stanhopea.

The plan then was for Roberto to film the wild orchids as he found them in Sierra Gorda, while a separate team would focus on getting the interaction of the bees with the Stanhopea flowers at the Botanical Gardens.

We now had several orchid plants in one place, increasing our chances of catching one in flower, but we were relying on the plants to attract wild bees. Our scientific consultant, David Roubik, a world authority on orchid bees, assured us that if we had the flowers in bloom the bees would be there. He also told us more about the remarkable way the orchids have evolved to take advantage of the bees. He described a petal on the orchid like a little slide or a tube that the orchid forces the bees to fall onto, so that it can attach its pollen to their backs. While David had observed this behaviour many times, no one had ever filmed this interaction before so we were left to imagine what exactly this would look like.

Kevin Flay used a straight-scope for a bee’s eye view.

Our cameraman Kevin Flay is one of the real macro masters and I knew with him on board we would be able to capture whatever happened, as long as the bee and the flowers were doing their thing. Now all we needed to do was wait for a flower to open. 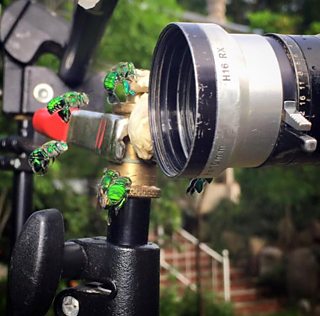 At the gardens, the staff had taken bets on when the first orchid would bloom but on our arrival all the Stanhopea specimens were still closed buds. With only six days of filming we decided to crack on, filming the bees on other orchids, demonstrating their foraging technique.

The bees store the orchid’s fragrant oils in a special pocket on their back legs and we used a slow motion camera that could capture 1000 frames per second (compared to 25 fps for real time), so we could show the bees hovering next to the flowers and scraping the oils along their legs.

Kevin used macro lenses, which allowed him to capture brilliant details, like the brushes the bees have on their front feet, but these lenses have an extremely narrow depth of field and so you could see nothing of the background. To get more context in the shots and to really give us a ‘bee’s eye view’, Kevin employed a straight-scope, a lens system that combines a macro and a wide lens, so you can have such a small animal in frame and have a sense of the orchid and the background.

Once Kevin had got familiar with the bees style of hovering he was getting some spectacular portraits of the bees but, as the week progressed, we still had no sense of when any of our Stanhopea orchids might bloom and we were getting very nervous. It is a total natural history filming cliché but in the end only one of our flowers blossomed on the penultimate day of our shoot.

We arrived at the gardens at 6am and Kevin went straight to check on the orchids. There was one particular specimen that had changed a lot over the week, with purple spots becoming more visible through the bud. He took a few moments to convince himself it had definitely changed but then he noticed small cracks along the top of the petals. He set a time-lapse running for three hours but we soon realised the flower was opening much quicker than we’d anticipated. Fortunately, he was able to make an adjustment and capture it as it opened up in just one hour. The other thing we had not expected was just how quickly the bees would zone in on the scent. Almost as soon as the flower had opened they were there, messing up Kevin’s shot!

An orchid bee scrapes fragrant oils into a special pocket on its hind legs.

Once it was fully open we began the close up filming of the bees in action and we watched as the bees slipped and fell into the orchid’s trap. By 6pm, the petals were starting to look battered. The bees frantically trampling all over the flowers wouldn’t have helped, but by the next day it was all over. The petals wilted for another year but we had captured an interaction between colourful Mexican wildlife that had never been filmed before.

How we made the series