City of revolution and renewal: Bettany Hughes on Istanbul

Byzantium, Constantinople, Istanbul. Bettany Hughes’s new book paints a portrait of a vibrant, troubled metropolis forged from ancient revolution, conquest, and upheaval. BIDISHA meets the historian and discusses a city with important lessons to learn from its own turbulent past.

Bettany Hughes pictured on location in Turkey. Courtesy of her website (bettanyhughes.co.uk).

As written by historian Bettany Hughes, the story of Istanbul – formerly Constantinople, formerly Byzantium – reads like an epic adventure.

Istanbul: A Tale of Three Cities, depicts a seething site of radicalism and revolution, coups and takeovers

Dedicated to “those who can no longer walk the streets,” it pays tribute to the citizens who have occupied the land since the 5th century AD. The comment is poignant given that the city’s conflicts are no less disturbing today.

In 2013 there were protests in Gezi Park against President Recep Tayyip Erdoğan’s infringement of freedom of the press, expression and assembly and the increasing religious conservatism of everyday life and in July last year a military coup against him was brutally quashed. There have been terrorist attacks at Ataturk airport and at the New Year’s celebrations in a city nightclub, which left dozens dead and hundreds injured.

“The history kept on happening,” Hughes agrees when I mention recent political events in Turkey. With her long view, she reminds me that recent popular demonstrations against the government echo the Nika riots of 532 AD, where jostling between rival charioteering teams escalated into protests over taxation and unpopular legal reforms that threatened to topple the ruling regime of Byzantine emperor Justinian.

“The week of the attempted coup I was due to fly there for my final stay. I went to my favourite baker, where you can buy a loaf of bread, pay for two, they make a cross on the blackboard outside and it means you’ve paid for a loaf for someone in need. He showed me the bullet holes all around his oven.”

Istanbul dissolves sharp distinctions between eras in the city’s past and also between the conflicting parties that sought dominance there. There are cameos from Vikings and Britons and a long history of fighting between Sunni and Shia Muslims across swathes of territory from North Africa to Azerbaijan.

Istanbul bears a simultaneous history in which ancient pagan shrines are appropriated into churches and then into sanctuaries and temples. Coins from 1st century BC show Hecate, protector of the pre-Roman “citylette” called Byzantion (later known by the Latin name Byzantium); her symbol was the moon and star, “a design echoed in the Turkish flag today,” Hughes notes.

There have been so many rulers who tried to create the city in their own image. The city always fights back
Bettany Hughes

Meanwhile there were attacks and blockades from all points including Egypt, Russia and Britain and migrants from Albania, Georgia and Ethiopia.

Istanbul joins Hughes’ previous books The Hemlock Cup: Socrates, Athens and the Search for the Good Life and Helen of Troy: Goddess, Princess Whore. In the course of her research she has had to adopt a panoply of different roles: linguist, detective, archaeologist, sociologist, art historian, military analyst, travel adventurer, natural geographer and academic. The result, in all cases, is history which is astonishingly alive, told with the rigour of a scholar and the vigour of a storyteller.

A prolific and magnetically erudite TV presenter, Hughes has examined the geniuses of the modern world (Marx, Nietzsche and Freud), those of the ancient world (Buddha, Socrates and Confucius); studied the history of women in religion in Divine Women; explored the mythologies of Alexandria, Atlantis and Athens; and followed the Aryans, Ancient Egyptians, the Minoans, the Spartans and the Moors.

Her own radio, TV and film production company, SandStone Global, produces international documentaries and is well into filming the story of Aphrodite, “the goddess of love and war – not a soppy Venus – telling the story from the point of its origin.”

Yet in examining a historical phenomenon from its point of origin, I argue, one of the striking trends is the perennial quality of war and conflict. Hughes admits, “I was expecting the pages of Istanbul to be full of people sitting listening to bees buzzing, having a sherbet at the hammam.

“The sad truth of history is that rage is always so close to the surface. The only thing that keeps it together is people’s desire to do so, to find something to celebrate and respect. Whatever monoculture anyone tries to impose on Istanbul, the people will shrug it off.

“There have been so many rulers who tried to create the city in their own image. The city always fights back.”

Istanbul: A Tale of Three Cities by Bettany Hughes is published by W&N. 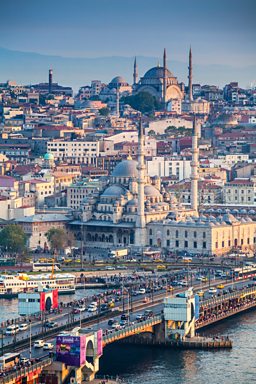 View over the Bosphorous to Eminonu Harbor, Galata Bridge. In the foreground is the New Mosque (Yeni Valide Camii). The Hagia Sophia can be seen in the distance. Photo by Westend61/Getty Images. 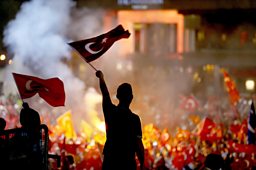