Venturing into a glacier

Jane Atkins, Producer of the ‘Spring’ episode of the series, had spotted some incredible images of a river of meltwater passing beneath an Alaskan glacier. She tracked down the photographer, who willingly shared details of the location, and for two days last spring we ventured into the Mendenhall glacier near Juneau, in southern Alaska. 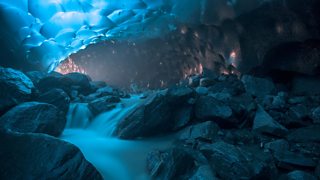 The unlocking of a frozen land and the birth of so much beautiful life as the Alaskan spring transformed the land.
Robin Cox

One hour’s kayaking across a meltwater lake had led us to the face of the glacier, where we now traded paddles for crampons and climbed the glacier toe to a dark opening in the dirty grey ice... it didn't look promising. But a few steps into the ice cave our eyes adjusted and wow... we were in a winding arched tunnel of ice some 10 metres wide and 100m long leading deep into the glacier's heart.

Glassy deep blue scalloped walls refracting light from above fed soft blueness onto this watery artery. Its flow cascaded over black pebbles and the hard smooth ceiling created deafening acoustics. To talk here required all the shouting and ear cupping of a nightclub, making communication almost impossible, and rigging a crane with camera gear challenging to say the least.

At the end of the first passage, a second source cascaded into a vertical cylinder of white ice. Sun piped down the tube from an open sky above lit the spot where the rivers of meltwater joined and then disappeared into a steep shaft running into the depths of the glacier. There in this the heart of this ice world, was something we didn’t expect to see and didn’t have time to film – but it was fascinating nonetheless.

In the glassy ceiling above I spotted an insect, a stonefly I later discovered, and witnessed the incredible moment that it released itself from an icy cocoon of perfectly clear ice. As it broke free and leapt into the air it left behind a perfect cast, an intricate ice carving showing every detail of its form. Had it been frozen in the glacier’s ice for days, weeks or six months or more? No-one could tell. Having been in suspended animation, it was now freed by the warming air flowing through this catacomb of ice. It seemed another survivor of a tough Alaskan winter had made a bid for spring freedom. This moment we witnessed encapsulated the story we were here to tell, the unlocking of a frozen land and the birth of so much beautiful life as the Alaskan spring transformed the land.

It was a privilege to find and film inside that ice cave, as only a couple of weeks later the entire ice tunnel itself collapsed… another reminder of life never standing still in Alaska. 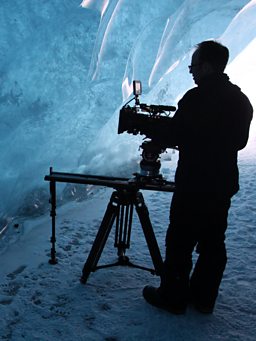 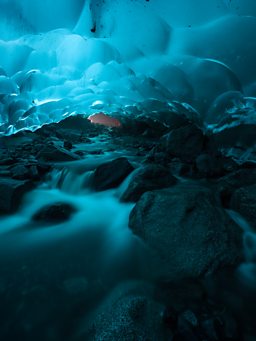