Seven Hanged: The book that started World War One

Few books can claim to have changed the world while remaining almost unknown. Seven Hanged, by Russian author Leonid Andreyev, is one such book. His short story inspired a group of Bosnian revolutionaries to assassinate Archduke Franz Ferdinand, triggering the crisis that led to World War I. The new edition's English translator, PROF. ANTHONY BRIGGS, explores its continuing power.

Detail from an illustration depicting the assassination of Archduke Franz Ferdinand on 28 June 1914. Photo by Leemage/UIG via Getty Images.

Everybody knows how the World War One started. Archduke Franz Ferdinand of Austria, heir to the Austro-Hungarian Empire, and his wife Sophie were assassinated in Sarajevo on 28 June 1914 by Gavrilo Princip, one of several young fanatics involved in the plot.

This incident set in train a series of events which culminated in a declaration of war by Austria-Hungary, followed by seventeen million deaths and a similar number of wounded men (including my father, Private Horace Briggs, on the Somme, 1916).

The curious fact that remains unknown is that the assassins, far from making it up as they went along, were following a detailed blueprint spelt out in a story by a minor Russian writer called Leonid Andreyev (1871-1919).

This man enjoyed a meteoric but short-lived career as the author of sensational stories, and ended where he had begun, in obscurity and poverty, with a blaze of celebrity and misspent riches in between.

His finest work, by far, was The Story of the Seven who were Hanged (1908), here shortened to Seven Hanged, a personal response to Leo Tolstoy’s anti-capital-punishment pamphlet of 1906, I Cannot be Silent.

Andreyev believed he could move more hearts by pungent story-telling than any amount of preaching, and so it turned out.

This tale, strongly influenced by the antics of real anarchists of the day, is nothing less than a dress-rehearsal for the Sarajevo assassination. 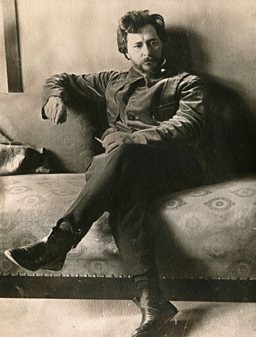 Leonid Andreyev was a playwright, short story writer, and the leader of the Expressionist movement in Russian literature. Photo by Fine Art Images/Heritage Images/Getty Images. 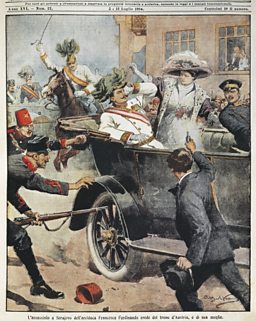 Dramatic illustration reconstructing the assassination of Archduke Franz Ferdinand, heir to the Austrian throne, and his wife. Image: DeAgostini/Getty Images. 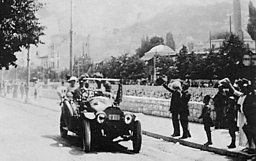 Archduke Franz Ferdinand and his wife Sophia riding in their car, minutes before their assassination. Photo STR/AFP/Getty Images. 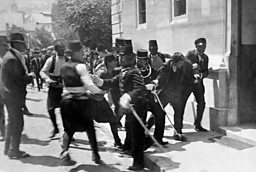 The arrest of Gavrilo Princip (second from right) after the assassination of Archduke Franz Ferdinand. Photo by ullstein bild/ullstein bild via Getty Images.

In the story, five idealistic young revolutionaries plan to assassinate a government minister. Arriving at the appointed spot, armed with bombs and guns, they are arrested (having been betrayed), placed before a court, found guilty and sentenced to death by hanging.

In gaol they are joined by two condemned common criminals, and the story follows the behaviour and mental processes of all seven as they move towards inevitable death at the end of a rope.

Somehow he managed to personalise the seven destinies, drawing down upon the condemned prisoners far more understanding and sympathy than blame – whatever they had done – and exposing the atrocity of judicial execution.

Make no mistake. Even today, more than a century on, this story will not fail to move new readers, giving many of them strong pause for thought, especially in those parts of the ‘civilised’ world where the barbarous and blundering practice of slaughtering our fellow-citizens is still carried out.

The ages of the five central figures in his story were between nineteen and 28; the Sarajevo party had a similar age-range.

In both cases five of the accused politicals were sentenced to death by hanging, though there were significant differences in the numbers actually executed.

In the story all five are hanged, together with the two non-political murderers.

BBC Youtube clip re-imagining the Franz Ferdinand assassination as if it happened in the 21st Century. 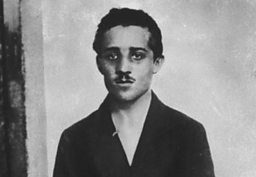 In Bosnia, only three hangings took place; ironically, the man who did the shooting, Gavrilo Princip, could not be executed because, at nineteen, he was under age for this punishment.

The ring-leader, Danilo Ilić, was hanged, in February 1915.

This could hardly have been more appropriate – he wanted nothing less – since it was he who had picked up Andreyev’s popular story, translated it, written about it, and then closely followed its details in the real world.

It was Ilić who worked out where the assassins had to stand on the day, and Ilić who had welcomed Princip into his mother’s home for several weeks before the attack.

Seven Hanged had provided the emotional and intellectual stimulus needed to propel him from revolutionary theory into practical action.

Of course, Ilić drew from Andreyev’s tale the opposite conclusion from nearly everyone else’s.

Instead of condemning the young activists for their naïve and immoral conduct, he was won over by their idealism, selfless sincerity and courage.

Thus did Ilić become the mainspring of the whole enterprise, drawing all his inspiration from Russian literature. You can be sure that he would also have (mis)read Dostoyevsky’s Devils (1872).

He definitely started World War One (which is not to say that he caused it).

These curious details are now long-forgotten, buried under the historical dust of a hundred years. This is how it should be. But the fictional story remains.

A riveting narrative, with several characters and scenes indelible from memory, it proves painfully suspenseful despite our foreknowledge of the ending, losing none of its power to move readers as a story in itself while incidentally arguing against capital punishment.

It is a sad comment on human affairs that this case still has to be argued, even after such a long lapse of time.

But, in the last analysis, the quality of Seven Hanged is neither political nor ethical; it is based on sheer narrative interest and human drama.

A final thought. If the bullet sent to kill Horace Briggs a hundred years ago this summer had travelled eight inches to the right, this story would have had to come to you from someone else. 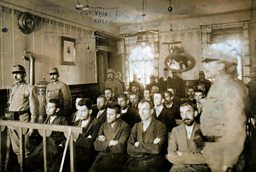 Gavrilo Princip (third prisoner from the left) and his co-conspirators in court on trial for the assassination of Archduke Franz Ferdinand. STR/AFP/Getty Images.

Seven Hanged by Leonid Andreyev is published as one of Penguin Book's Little Black Classics.

Seven Hanged by Leonid Andreyev is one of the 46 new Little Black Classics to be published on 3 March 2016 by Penguin Books. Professor Anthony Briggs is a leading specialist on the works of Alexander Pushkin and Leo Tolstoy and translated the Penguin Books edition of Andreyev's Seven Hanged into English.