In a new book on Pop art, the art critic Alastair Sooke reflects on a meeting with the influential American artist and photographer, Ed Ruscha. Synonymous with the Pop art movement, Ruscha's photographs cast a cool, fresh eye on objects not normally considered to be aesthetically pleasing.

It was returning home to visit his family several times each year that eventually inspired Ed Ruscha to produce one of his most memorable early Pop works.

He undertook the journey in various ways – hitchhiking, driving or sometimes hopping on a bus, but always passing through the states of California, Arizona, New Mexico, Texas, and into Oklahoma along Route 66.

Inspired by the black-and-white photography of Walker Evans and Robert Frank, both of whom had offered distinctive, and far from celebratory, visions of contemporary American life (documenting, in Frank’s case, his own road trip across the United States in 1955), Ruscha started taking pictures of the various gas stations that he stopped at or passed during his journeys. Eventually he had amassed a group of around fifty images of gas stations, mostly taken in 1962.

When I visited Ruscha’s studio in Culver City, prints of them all had been laid out in geographical sequence from east to west, starting in Oklahoma and ending in LA – documents of a road trip that was once a regular occurrence in the artist’s life. 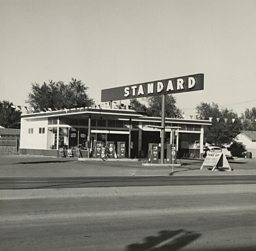 ‘I always liked the architecture of them,’ he says, ‘and, uh, the fact that everybody needs them, if they’re going to travel. Somehow the whole culture of gas stations had a sort of zoom factor.’

Occasionally we see the long shadow of Ruscha himself, caught at the moment of taking the picture

The style of the photographs is immediately striking.

It is often described as ‘deadpan’, which reflects their flat, matter-of-fact, seemingly artless character, apparently drained of emotion.

In most cases Ruscha photographed the gas stations from the vantage point of a passing car window: sometimes, blurry elements of the vehicle in which he was travelling are visible in the foreground.

We see lots of tarmac – often with horizontal road markings that appear to swoosh past, conjuring the sensation of driving at speed – and, of course, the squat, blocky forms of the gas stations themselves: usually white and brightly lit by stark sunshine, like specimens in a surreal scientific study. (One or two were shot at night – and a couple of these nocturnal scenes, illuminated with copious neon, are unusually blurry.) 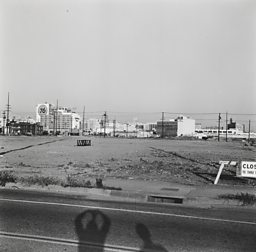 Maybe, though, the stations are more like Duchamp’s ready-mades plucked from reality: after all, if a mass-produced urinal could be a valid work of art, why not an actual gas station, or at least a photograph of one?

‘They are ready-mades, you know,’ Ruscha agrees. ‘And I happened to have this camera that I wanted to record them with. In a sense I was glorifying each one of these things, calling attention to something that most people might say doesn’t need calling attention to.’

In the photographs there are very few people, something that adds to the generally clinical air, as if we are looking at typographical illustrations in a specialist textbook or manual, or perhaps an imaginary catalogue offering different brands of gas station for curious shoppers interested in that sort of thing – underscoring the photographs, after all, is a note of brittle, possibly ironic humour.

Occasionally we see the long shadow of Ruscha himself, caught at the moment of taking the picture, reminding us of the autobiographical context of the series: ‘There is a certain amount of me in there,’ he concedes.

But, rather than human interest, the primary focus is often the large lettering of signs and corporate logos, such as the words ‘SEASIDE’ and ‘BOB’S SERVICE’ that adorn a station in LA.

Or an establishment called ‘RIMMY JIM’S’ in Arizona, where as well as gas, passers- by could pick up ‘NAVAJO RUGS’ or ‘BEER & LIQUORS’. (Did Ruscha pop in to Rimmy Jim’s for a quick drink? ‘I sure did.’)

The enormous word ‘STANDARD’ floating like a banner raised aloft above a forecourt in Amarillo, Texas.

And – appropriately enough for the final image in the sequence – a billboard bearing the brand name ‘FINA’.

Extract from Pop Art: A Colourful History by Alastair Sooke.