Sleep is the greatest natural performance enhancer available to each and every one of us. Conversely, poor sleep can affect our performance on a pitch, track or court, and have a negative impact on our work and relationships.

In Don’t Tell Me The Score, Simon Mundie talks to Dr Guy Meadows, sleep expert and founder of The Sleep School, who has helped many sportspeople wave goodbye to insomnia.

He explains how Acceptance and Commitment Therapy – which teaches you to welcome in rather than fight your uncomfortable feelings and emotions – is not only a powerful tool against sleeplessness, but can also help us address anxiety in all areas of life. 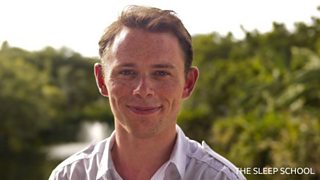 Dr Guy Meadows is a sleep physiologist, with a doctorate from Imperial College, London. He has been working on sleep for the past 12 years, eight of which have been dedicated purely to helping clients overcome insomnia. ... Guy is a published author and co-founder of Sleep To Perform and The Sleep School.

Hear the interview in full on BBC Sounds

Why is sleep so important?

“Sleep is definitely the most powerful, natural health providing behaviour that you can perform,” says Guy. “If you want to perform well mentally, then you need great sleep because it enables us to be focused and attentive, to recall memory, to be creative and motivated.”

Every aspect of your short and long-term health and performance is underpinned by sleep.

Sleep also plays an important role in maintaining our weight by managing our appetite hormones. In fact, “Every aspect of your short and long-term health and performance is underpinned by sleep.”

But knowing sleep is crucial can pile on the pressure

Knowing we need sleep can cause insomnia to rear its ugly head. Guy has worked with sportspeople who, as a major sporting event approaches, have been terrified that sleep will give them the slip. “When the seed of doubt is given room to grow, the result is bad night after bad night – and the brain begins to connect these occasions with insomnia.” The night before an event, these athletes are hyper-aroused rather than relaxed. “They’re feeling anxious – almost as if they’re about to start the race.” In fact, all they’re doing is putting their head on the pillow.

In evolutionary terms, this response makes sense. Our cave-dwelling ancestors might not have realised that a sabre-toothed tiger was dangerous the first time they stumbled across one. But once bitten, twice shy! The next time they crossed paths with the animal the amygdala part of the brain would be conditioned to start a “fight or flight” response: releasing adrenaline and causing the heart to race. It’s the same with sleeplessness – the sufferer recognises it as something “dangerous” and becomes conditioned to react with this same survival response, making sleep impossible.

What is Acceptance and Commitment Therapy?

Acceptance and Commitment Therapy, or ACT, is about altering the way someone relates to their insomnia and the array of unwanted symptoms it brings: the racing mind, panic and anxiety. Whereas Cognitive Behavioural Therapy (CBT) is about working hard to suppress those negative thoughts, Guy encourages insomnia sufferers to “meet and greet” them at the door, because by “playing with them you diffuse their power.” By welcoming your fight and flight response you can actually disarm it, so that going to bed doesn’t feel like going into battle. ACT “transforms the wakefulness and the thoughts and the fear into something that’s not so fearful, which ultimately creates this space from which sleep can emerge.”

1. Get perspective on your thoughts

ACT encourages playfulness – a really powerful way to overcome fear. If it’s not just one anxious thought that’s bothering you, but what feels like thousands, try giving that worrisome part of your brain an amusing name. Some of Guy’s clients have opted for “Head of Drama” or “Death Star”! Guy calls his “The Circus” because it can feel like everything piling in at once.

3. Be willing to be awake

“One of the biggest things that causes people to remain awake at night is their struggle to get to sleep,” says Guy. He tries to increase a client’s willingness to be awake: “If you teach people to give themselves permission that it’s ok to be awake, then you create the mental and physical landscape from which sleep can emerge.”

4. Stay relaxed in the face of sleeplessness

Learn to welcome the negative thoughts, but remain relaxed. Guy likens insomnia to a stormy ocean: being caught up in the anxious thoughts is like crashing around on the surface so, instead, imagine you’re sitting on the calm seabed where you can “look up and observe the storm… It’s about being able to have that perspective and to be able to notice the storm occurring and be ok with it being there.”

5. Give your emotions a shape

An array of emotions can show up in the middle of the night. You might feel fear, guilt, anger, or shame. Notice where each feeling is in your body – you might feel anxiety in your stomach for example – and give it a shape. Maybe it’s like a fiery ball or an icy pole. By going through this process, “you’re sitting with the very thing you fear, which to your amygdala is such an important lesson.” It lets your brain know that the feeling is not a threat.

6. Change negative emotions into something positive

By welcoming anxiety, rather than trying to banish it, it can transmute into something positive. “I now see the function of my anxiety as something valued. When I’m going to give a big speech or presentation, it’s important for it to be there for me to perform at my best.”

Don’t check your phone: the blue light will instantly activate the light sensitive cells in your eyes.

Being worried that they won’t sleep can make insomniacs go to bed earlier in the hope they will sleep sooner, or stay up later because turning in simply fills them with dread. This chopping and changing can create something called “social jetlag,” says Guy. Just keeping regular bedtimes and wake times is simple but really important.

“Sit and choose to be still with your eyes closed, or open, on a park bench and just be with what’s there,” he suggests. Notice the sounds, the wind on your face, the wood underneath you, and your breath. Building up that noticing skill is really valuable and will help you at night when those negative emotions appear.

9. Focus on what’s important to you

Many insomniacs will stop living their lives in order to improve their sleep, says Guy. They stop going out with their friends, or won’t catch an early flight because it will disturb their rest. Instead, he encourages everyone to live by their values, even if they haven’t slept well. By giving time to what’s important to you, you won’t resent insomnia so much, which means less struggle and a better chance of sleep.

“A lot of people get caffeine wrong.” Caffeine has a half-life of six hours, which means if you have a cup of coffee at midday, half of the drug will still be in your body at 6pm and a quarter will be in your system at midnight. “Drink it, enjoy it, two or three cups – but try to knock it in the head by midday or a little bit later.’

“If you wake up in the middle of the night, the most important thing is actually to stay in bed and rest,” says Guy. “Don’t check your phone: the blue light will instantly activate the light sensitive cells in your eyes and wake you up and inhibit melatonin.” Just do what a normal sleeper might do: go to toilet if you need to, change your position, get comfy. But just remember that rest is good for you and stay where you are.