How YOUR parasites affect YOU

After listening to this week’s programme on parasitism, all I want to do is bleach my flat so heavily that everything in it either dies or ends up blind and hairless.

But rather than do this, I have decided to be measured and scientific, and convey objectively the destructive and (occasional) helpful things that parasites do to the human body.

1. You are riddled with parasites

Despite our suits, fashionable trainers and expensive haircuts, we are really just ecosystems on legs. Writing, crawling, evolving masses of parasites. Put the detergent down and just accept it.

Humans can host up to 400 species of parasite. Proportionally, from your left knee down to your big toe is your own cells and the rest of your body is other stuff, a lot of it parasitic. In fact, parasites make up half of the planet’s biomass. 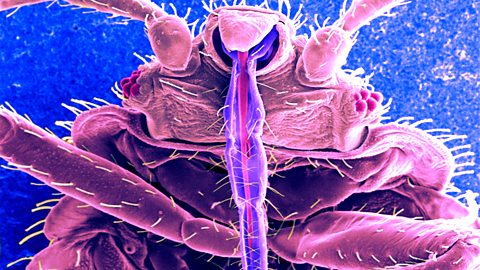 How parasites move from host to host

Kayla King tells Melvyn Bragg about types of parasites and how they move between hosts.

2. They pull your strings

Parasites have played a significant role in the course of evolution. Zebras are thought to be stripy because insects don’t want to land on that particular pattern, meaning that zebras are spared constant biting.

Then there is the phenomenon of the zombie snails, which is too bizarre to omit. This occurs when snails ingest the Luco chloridium parasite, which makes their antennae swell and strobe, and also causes the snails to stay in full view of their predators during the day instead of hiding away. This is so the parasite can make its way to its target host – birds.

But when it comes to humans, our parasitic overlords have influenced us in a different way.

We owe our sex lives to our parasites
Steve Jones

Hosts and parasites co-evolve, and host survival chances are considerably higher if they are sexual rather than asexual beings. Sexual reproduction creates beings with novel gene combinations, making them less vulnerable to being wiped out by a parasite than asexual creatures. And females are inclined to pick males who are more resistant to parasites and who give out the message, “I’m fit, I’m resistant to infection.”

This applies to humans as well as other animals, and as Steve Jones of UCL put it, “We owe our sex lives to our parasites.”

Females become more picky and resist all but the best males. Well, some of us do at least. Anyone who has seen what some women will settle for on New Year's Eve will know that is not always true.

Another fascinating and relatively common phenomenon is the effect that a cat parasite has on humans. At least one third of humans are infected with toxoplasma. It gets into our brains and studies suggest a strong link between psychological conditions such as schizophrenia and depression, and this parasite. Also, people killed by dangerous driving are twice as likely to have been infected by it than the general population.

Truly fascinating In Our Time on @BBCRadio4. Toxoplasma parasite passes to humans from cats. So basically, toxoplasma runs the internet!

3. They lie in wait for you

If you wanted to build bridges between humans across millennia, you could look at what kind of parasites people were carting about then. It’s fascinating that we’ve always been carrying this extra baggage around.

The mummies of Ancient Egypt have preserved parasite eggs in them, and when scientists examined soil samples of the recently exhumed King Richard III, they found he had round worms. These worms were common at the time and were around 10 inches long.

The reason this archaeology of parasites can exist is because they need to be pretty hardy. The worms that live in our guts lay eggs which leave the human body in our faeces. They go into the environment and, in order to survive until they find another host, they have hard shells.

While the ones found with the Egyptian mummies or the last Plantagenet king are no longer active, some parasites can hang around for a good long while. The mysterious death of Lord Carnarvon has been attributed to an infection in King Tut’s tomb that lay in wait for thousands of years. Note to self: do not explore cursed tombs.

4. You'd be weaker without them

However damaging they can be, they’re a part of the world and a part of us.

Parasite-free mice that are grown in labs are very weak and tend to die quickly when compared with their parasite-full contemporaries.

Parasites force nature to come up with new ways of resisting them, so without them nature would be less diverse.

They’ve been part of what’s made our societies – all the way from monkeys grooming each other to ancient societies picking off skin-dwelling parasites to the de-lousing stations in Inuit dwellings.

It’s thought that a lack of parasites today – with detergents and so on – means that we’re more prone to allergies.

Parasites make up who we are, but I can’t help but feel it would be nicer if they didn’t.

Excellent "In Our Time" on Parasitism. Can it be argued that Man is a parasite on its host, Earth?