Summary: By Christmas 1914 soldiers from the Allied and German armies had dug-in along a trench system reaching from Switzerland to the North Sea. On Christmas Eve the guns fell silent. The following morning - Christmas Day - troops on both sides climbed from their trenches and met together in No-Man's-Land, between the battle lines. They shared drinks, played football, embraced, exchanged presents and sang carols. This spontaneous truce was observed in several places along the Western Front, but by no means everywhere. The following day - Boxing Day - the fighting began once again.

Resources: an image of soldiers during the Christmas Truce; a 1 minute slideshow video to play during the reflection. 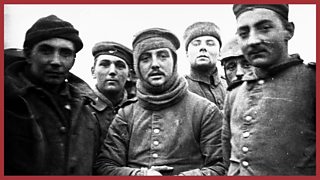 They had the same carol as us!

A soldier writes in his diary about the events of the famous Christmas Truce during the first year of World War 1. The truce begins with the guns falling silent on Christmas Eve, a solitary German soldier singing 'Stille Nacht' and the British soldiers joining in with 'Silent Night' from their trenches. The following morning the soldiers meet in No Man's Land to chat, play games and share gifts. The unofficial truce lasts a single day. On Boxing Day, the guns begin pounding once more.

End of speech: '...Strangest Christmas I ever had.'