With people-led movements like Occupy and #MeToo challenging injustices, the emergence of ‘the activist’ during the 20th century is still having an impact today. Protest, rebellion and revolution were nothing new, but the combination of social reform and the development of mass media during the last century gave activism a new power. A series of passionate, compassionate and charismatic individuals created and led vast new movements that brought about fundamental change.

Sadly, there was plenty for this new breed of campaigner to do in the 20th century. From women’s rights to racism – they had their work cut out. But these four iconic activists all looked at the world around them, concluded it wasn’t fair and then did something about it.

In a gentle way, you can shake the world.

1. He never took the easy option

After experiencing racism whilst working in South Africa as a lawyer, rather than go home, Gandhi stood up for his rights. He formulated the principles behind the non-violent resistance that became the basis of all his protests and put them into action. After forcing authorities to abandon unfair taxes, Gandhi returned home in 1915 poised to spearhead ‘Swaraj’ – complete Indian independence.

Gandhi inspired India-wide boycotts of anything British and tried to encourage the country’s various communities – Hindus, Muslims Christians, Jains, Sikhs etc – to work together. It was a huge undertaking and the journey to independence was far from smooth. Gandhi’s early calls for non-violence when taking on the might of the British Empire proved difficult in practice, leading to deaths, reprisals and arrests.

3. He helped topple an empire without raising a weapon

As World War Two weakened Britain’s hold on the Empire, Gandhi’s aims were realised… in 1947 independence came to his beloved country. But his hopes that Hindu and Muslim communities could live together in one state were dashed when the country was split into two: India and Pakistan. The resulting violence cost Gandhi his life a year later when he was assassinated by a Hindu extremist. Yet his model for peaceful resistance and inclusive values not only freed his country – it has guided activists across the globe ever since.

Lived: 1880-1968
Born: Tuscumbia, Alabama, USA
Known for: A writer who confounded attitudes by proving her disability was not debilitating

Writer, journalist, activist, ambassador, deaf, blind… Helen Keller’s life was defined by what she could do.

Life is either a daring adventure, or nothing.

1. She learnt to read and write despite never hearing or seeing a word

Illness rendered Keller deaf and blind as a baby, before she could fully grasp the concept of words or what they described. But thanks to the pioneering work of teacher Anne Sullivan, Keller not only learnt to read and write but went on to graduate from University.

2. She inspired a world she was cut off from

3. She was an activist by example

Keller’s writing and activism did much to raise awareness of disability around the globe at a time when a lack of rights and inferior treatment of disabled people was common. Confounding prejudice and changing attitudes, the way she lived her life helped disabled people the world over.

Martin Luther King, Jr had a dream of an equal America, free from racial discrimination.

Injustice anywhere is a threat to justice everywhere.

1. He made sure it was the end of the line for segregation in America

In 1955 Rosa Parks refused to give up her seat on a segregated bus in Montgomery, Alabama. This sparked a 13-month mass protest boycotting the public buses led by Dr King. He had been inspired by Gandhi’s use of non-violent resistance – and it paid dividends. The boycott was a defining moment in the emerging civil rights movement in the United States and it ended segregation on buses just over a year later.

2. He forced a country to be honest with itself

King showed how local discrimination was a stain on the USA as a whole. In 1963 he highlighted how Birmingham, Alabama was “the most segregated city in America”, leading to television cameras capturing brutal images of police repression. King’s sentiments and campaigning found expression in a rally attended by over 250,000 people in Washington D.C. Here the pastor-turned-activist delivered his I Have A Dream speech; one of the greatest pieces of oratory of all time. It’s no coincidence that the US Congress outlawed segregation in public spaces just a year later in 1964.

3. His dream inspired a world he didn’t live to see

King’s activism wasn’t without its costs. Arrested and spied on, in 1968 he was assassinated in Memphis by a far-right gunman. Yet the forces of change that King ignited could not be stopped. The US has continued to take strides towards equality, with progress on segregation, voting rights, the election of America’s first black president in 2008… and the dedication of an annual federal holiday to Martin Luther King Jr’s memory. In the 21st century, there remain significant battles to be fought, but King’s dream continues to inspire. Movements like Black Lives Matter, #MeToo and March for Our Lives all draw on and continue his fundamental message of nonviolence and equality.

We have to free half of the human race, the women, so that they can help to free the other half.

1. She wasn’t afraid to rock the vote… or society

After the campaign for women’s right to vote had been (politely) running for decades Emmeline Pankhurst decided enough was enough. She co-founded a group with the motto "Deeds not words". This band of women became known as the suffragettes and Pankhurst led them through a series of uncompromising protests. Her call for supporters to “rush parliament” saw her sent to prison for the first time. As Pankhurst’s movement grew increasingly militant – arson and vandalism became a well-used tactics – spells behind bars turned into a regular occurrence. British society was astonished.

2. She never stopped campaigning, even in prison

Even behind bars the suffragettes strived to improve things. They objected to the conditions prisoners endured with a series of hunger strikes, many of which were brutally ended with force-feeding. It was a tactic by the authorities that ultimately back-fired, as the bad treatment led to increasing public sympathy towards the suffragette movement.

3. She contributed to two victories

When the First World War broke out Pankhurst called for a truce at home and paused her more aggressive tactics. As men headed for the battlefields, she encouraged women to step up and keep the country running – and they did. When the war was over calls for women’s suffrage could no longer be ignored and in 1918 some women over 30 got the vote. Ten years later men and women got the same voting rights, bitter-sweetly just weeks after Emmeline Pankhurst died.

Four activists. Four extraordinary achievements. But only one can be the most iconic activist of the 20th century. The decision is yours.

Watch: Activists of the 20th Century 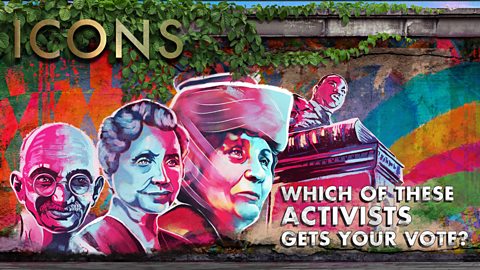 Activists of the 20th Century

Four icons of real and lasting change… Which of these Activists gets your vote?