What is it about children in horror that is so chilling?

Is it the corruption of innocence or the fact that something we normally protect can try and do us harm? To celebrate Radio 4's podcast Children of the Stones in all its spine-chilling glory, here is the definitive list of the top 10 spooky children… 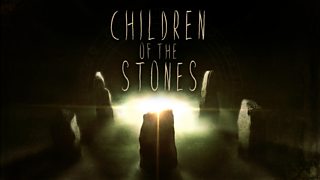 Listen to Children of the Stones

The unnervingly intelligent, unsettlingly happy children of Milbury, a quaint English town surrounded by ancient standing stones, are the peak of creepy. They first appeared in the 1977 Children of the Stones TV series, which comedian Stewart Lee has called "'the scariest programme ever made for children". Now you can hear the little horrors in Radio 4's podcast adaptation of the terrifying classic. 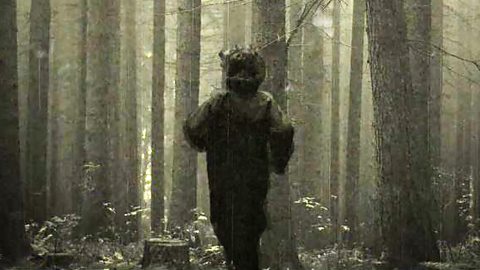 "Do you feel the shiver?"

Welcome to Children of the Stones, the terrifying podcast from Radio 4.

Stephen King penned two entries on this list, and we start with the ones made iconic in Stanley Kubrick’s film adaptation of The Shining. These ghostly twins lurk menacingly in the hallway of the Overlook Hotel as sweet little Danny Torrance pedals around on the incredibly seventies carpet. The fact that they speak tonelessly and in unison doesn’t help either…

The movie Hereditary took the innocuous sound of someone clicking their tongue and made it terrifying, thanks mainly to Milly Shapiro’s performance as Charlie. This young girl represents a hereditary evil encoded in her family’s DNA. Despite her blankly haunted expression and fondness for collecting dead birds, it’s impossible not to sympathise with the innocent and fragile Charlie, which makes the film’s outcome all the more disturbing.

Whispering the infamous line “I see dead people”, Cole Sear in The Sixth Sense is as much of a victim of the horror around him as the audience is. He can’t help seeing anguished spirits of the recently departed, any more than we can help leaping behind the sofa.

Rosemary’s Baby stars Mia Farrow as a somewhat naive young mother who gives birth to the Devil’s child. Oh c’mon, it’s easily done. And every baby is beautiful to its mother, even if it does have bright red eyes. It was directed by Roman Polanski and is allegedly his favourite of his films. 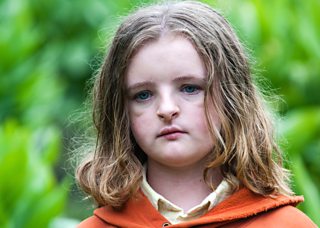 Charlie, as played by Milly Shapiro in Hereditary (2018) 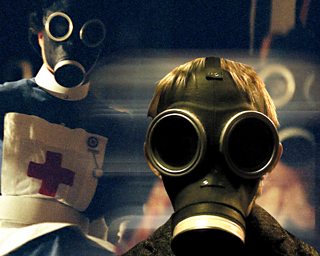 "Are you my mummy?"
Dr Who: The Empty Child

Who can forget The Empty Child episode of Doctor Who, in which a mysterious child wearing a gas mask (that appears to contain no face) repeatedly asks, “Are you my mummy?” The episode is not only a brilliant representation of life during the Blitz – it’s also absolutely petrifying.

Wearing a faded sack mask, complete with one sinister button for an eye, you’d be forgiven for recoiling in fear from the tragically deformed Tomás in J. A. Bayona’s Spanish horror masterpiece. But appearances can be deceptive, and the true horror of this story eventually becomes very evident with what is perhaps the most gut-wrenching ending of any modern horror film.

It’s the little things that give it away. Change in sleeping patterns, loss of appetite, crab-walking down the stairs, head swivelling around through 360 degrees… When adorable little Regan’s parents realise she may be possessed, they call in the titular exorcist and the horror begins.

Louis does the absolute worst thing when his infant son Gage is tragically killed: He buries the boy in a magical pet cemetery to try and bring him back to life. This is a Steven King novel (and more recently a 2019 film), so needless to say the Gage that comes back isn’t quite what Louis bargained for. As the character Jud wisely puts it: “Sometimes, dead is better.”

This list wouldn’t be complete without the iconic Damien Thorn. As the Antichrist and son of the Devil, Damien is perhaps the definitive creepy child. And his unnervingly gleeful grin doesn’t help matters. By the end of The Omen we see Damien’s father Robert (played by Gregory Peck) battle inner turmoil at the need to murder his own child, while the movie’s exasperated audience yells at him to get on with it.

Harvey Stephens, as Damien from the film The Omen (1976)

For more spine-chilling entertainment, check out Children of the Stones on BBC Sounds.