Taking place from 26-28 March, this year's festival will include new performances and classic sets! 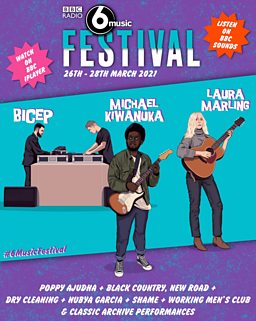 We may not be able to enjoy live music in venues at the moment, but that doesn't mean you can't experience some stellar sets from the comfort of your own home. From Friday 26th March to Sunday 28th March, the 6 Music Festival 2021 will bring brand-new live performances from some of music's hottest names, plus classic sets from previous years, on air on 6 Music and available on BBC Sounds and BBC iPlayer.

The 2021 festival will include nine new performances from the likes of Bicep, Michael Kiwanuka, and Laura Marling, all filmed at the astounding Alexandra Palace in London, as well as sets filmed in the BBC Radio Theatre in BBC Broadcasting House from Shame, Dry Cleaning, Black Country, New Road and more.

These brand new sets will be made available in full on BBC iPlayer and BBC Sounds from Friday 26th March, with highlights and select full sets played out on 6 Music between Friday 26th and Sunday 28th March.

Classic sets will be available on BBC Sounds from Monday 22nd March, with many also available to watch in full on BBC iPlayer. These will include memorable moments from across the years from Depeche Mode, Foals, James Blake, Kelis, Little Simz, Loyle Carner, Róisín Murphy, The Fall The National, Underworld and Young Fathers, among others.

BBC iPlayer will also present an eight hour stream of back to back new and classic sets from 2pm to 10pm on Sunday 28th March.

That's not all either! Highlights from Michael Kiwanuka, Laura Marling and Bicep's performances will also be shown on BBC Four at 11pm on Friday 26th March. The programme will also feature an one-on-one interview between Michael Kiwanuka and 6 Music's Cerys Matthews.

See the full line-up for the 6 Music Festival 2021 below and find all the acts here.

New performances for 2021 include:

Watch these brand-new sets in full on BBC iPlayer and listen to them on BBC Sounds from Friday 26th March.

Plus classic sets from:

The sets will be available on BBC Sounds from Monday 22nd March, with many also available to watch in full on BBC iPlayer.