Glastonbury Experience 2020: How to watch and listen

Glastonbury weekend may not be what we're used to this year, but you can still get into the festival feeling at home. The Glastonbury Experience on the BBC will mark the 50th anniversary of the legendary festival in style, with hours of classic performances and footage airing across TV, radio and online.

Here's how you can keep up with all the action...

With a brand new dedicated Glastonbury channel, BBC iPlayer will be a go-to place for all Glasto lovers. From Thursday to Monday, we'll be bringing you iconic sets and standout moments from past festivals, plus all the on-air TV coverage.

iPlayer will also be your place to enjoy over 100 performances from your favourite Glastonbury performers of years gone by, plus over 20 standout tracks.

Immerse yourself in the sounds of Glastonbury with hours of audio highlights on the BBC Sounds app. We'll be bringing you over 50 archive performances from a stellar line-up of artists, plus special Glastonbury mixes, curated collections and all the radio on-air action.

You'll be able to follow the Glastonbury celebrations on Radio 2, 6 Music and 1Xtra. Highlights include a special series of shows from Jo Whiley on Radio 2 from Monday 22 June, Stormzy, Dave and JAY-Z listening partirs on 1Xtra and Lauren Laverne joined by Glastonbury organiser Emily Eavis on Thursday 25 June.

Take a trip down Glasto memory lane from the comfort of your own couch. BBC Two and BBC Four will be showing classic Glastonbury performances in full, from artists including Adele (2016), Beyoncé (2011), Coldplay (2016), JAY-Z (2008), plus David Bowie's 2000 Glastonbury set, which will be aired in full on TV for the first time ever.

BBC Two will be airing a 90 minute live programme each night of Glastonbury weekend (Friday to Sunday), with Jo Whiley and Mark Radcliffe presenting Friday’s programme and Clara Amfo and Lauren Laverne hosting on Saturday and Sunday. Jo and Mark will also pay tribute to Glastonbury’s famed Sunday afternoon ‘Legends’ slot with a special programme early Sunday evening, taking a look back at the many legendary artists to have graced that much loved festival slot.

4. Get involved on socials!

Keep up with all the action on social media by following @BBCGlasto and get in touch by using the #Glastonbury2020 hashtag to let us know how you're getting into the spirit of things! 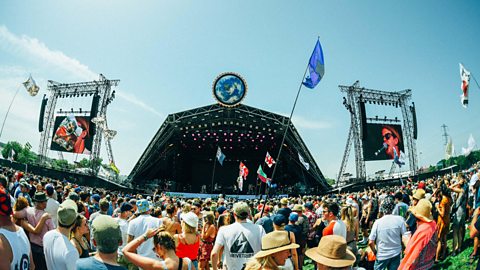 Relive the Best of Glastonbury on the BBC

Join us on BBC iPlayer and BBC Sounds for some of Glastonbury's finest moments.