When the Gin Craze swept London

Gin is all the rage again: they’ve been distilling it in The Archers and on The Apprentice – and UK sales are set to overtake Scotch whisky by the end of the decade. Helen Nianias shares what she learned from In Our Time about when gin was last a thing.

We are fascinated by gin. Obsessed with it. Crazed, you could say.

There’s all the novelty tat that comes along with it. Gin advent calendars, G&T cupcakes, tea towels saying “keep calm and drink gin”.

It might seem like we’re in the midst of a gin epidemic but it’s small beer compared with the Gin Craze that gripped London in the 1700s.

Gin was originally brought over with William of Orange in 1688, and he encouraged people to start up their own distilleries. It was a London-centric trend and by the 1730s there were some 1,500 distilleries in the capital, most of them tiny, two-bit, home-brew affairs.

Gin was seen as medicinal – an aphrodisiac and pitched as a cure for society’s terrible, terrible addiction to tea.

Use gin to overcome your tea addiction!

I’ve long wondered why gin is pigeonholed as a woman’s drink: “Mother’s ruin”, “Gin and tonic for the lady…” and so on. And even now the merchandise is pitched at women. Why?

Perhaps this can be traced back to the 18th-century craze. Gin was the drink of sailors, and as they flooded into London courtesy of the new King, women from surrounding counties decided they’d quite like to drop anchor in London and moor up alongside the hard-drinking men from the Navy.

Much of the merchandise which appeared during the original Gin Craze appealed to women – the old big beer glasses were swapped for cute little drinking receptacles, plus the cool London gin scene gave an opportunity to show off the latest fashions while boozing.

Gin is even personified as a woman, given the nicknames “Madame Geneva”, “Mother Gin” or “Ladies’ Delight”. When gin was more heavily regulated in the 1800s, people held funerals for Madame Geneva. 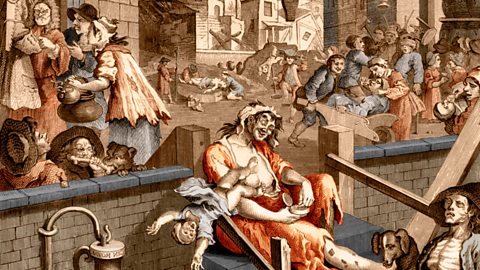 William Hogarth’s famous 1751 print of Gin Lane (see above) tells a different story. Rather than young women delighting in their intoxication, he told a tale of ruined mothers dropping their babies because they were so out of their heads.

There were many stories – possibly fables – of women killing babies because they were drunk, but what Hogarth’s piece really explains about gin-soaked society is how absolutely horrified the upper classes became about working-class drinking culture.

No doubt there were severe health implications with everyone, including children, drinking so much all the time. But when legislation was introduced in the 18th century, guess who was targeted? Closing down small gin distilleries certainly didn’t impact on the aristocracy.

People did not want their gin taken away from them. Drunkenness was seen as a part of British liberty and an inalienable right of the people. If you’ve had an office Christmas party recently, you’ll know this to be a fiercely held belief today.

The reforms sparked riots, with people taking to the streets chanting, “No gin, no King”.

One of the reasons Brits wanted to cling on to their gin was because it was seen as patriotic when compared to poncy French wines and brandies, but the upper classes believed the poor were “getting above themselves”.

Political choices in alcohol. Who knew?

We were known as a drinking nation on the 17th century? Some things never change

Gin: a plan for economic recovery and an expression of anti-French sentiment in 18thC Britain...

The upper echelons of society were happily overseeing the sweeping changes and theorising about the moral implications of gin drinking while consuming loads of it themselves. It was a common thing for the elite to hide bottles of (imported) gin in their wardrobes.

The way I see it, the Gin Craze could be defined by virulent feelings towards Europe and upper-class Londoners telling everyone else what to do. I suppose some things don’t change.

Proving that no British trend can pass without some form of accompanying slogan-based clutter, teacups were manufactured with messages in the bottom saying “don’t put gin in me”.

This is a really good idea for modern gin-related merchandise and is now my idea for getting rich in 2017. I will be very suspicious if I see anyone else making these in the near future.

Perhaps people living in the time of the Gin Craze had some sort of crystal ball/particularly insightful fortune teller/time-travel device to tell them that what people in 2016 would want would be gin and cats. So the 1750s version of a modern meme was created – a model of a cat which dispensed gin illicitly through a lead pipe in its tail.

Surreal image of the day; a mechanical cat that dispensed gin to the London poor on @BBCInOurTime

The only way they could have made this more zeitgeisty would have been somehow to include salted caramel and/or opportunities for selfies. Perhaps the contestants on The Apprentice could come up with that next time...

Me, after @BBCRadio4 #IOT on the Gin Craze