As the 'Final Cut' of 1982 sci-fi classic Blade Runner returns to UK cinemas, a photo archive has emerged which reveals the painstaking handiwork behind the film's hugely influential visuals.

Long revered by film buffs and architects alike for its dysoptian vision of a smog-choked Los Angeles circa 2019, Ridley Scott's film stars Harrison Ford as Rick Deckard, the eponymous 'blade runner', who is charged with hunting down rogue 'replicants' - genetically engineered beings almost indistinguishable from humans.

The distinctive look and feel of the film was down to Douglas Trumbull and a small army of craftsmen at his Entertainment Effects Group in Marina del Rey, California, who created an array of highly detailed models and matte backgrounds - in stark contrast to the kind of ultra-hi-tech digital effects so prevalent today.

A gallery of 142 scanned slides, uploaded by a user called 'minicity', shows the team at work on many of the film's iconic buildings and vehicles - including the Tyrell Corporation pyramid and the flying 'spinner cars'.

We've posted a selection here and you can see the full set at imgur.com.

Blade Runner: The Final Cut is on general release. 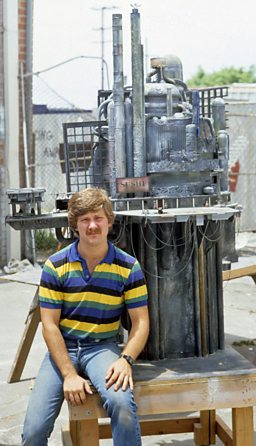