The VIVE Pro 2 is an incredibly impressive piece of hardware that pushes VR forward by prioritising immersion and comfort.

A new, 120 degree field of view means that VR games no longer feel like they’re being looked at through a telescope, instead the dream of a world that fully encompasses your vision has never been closer. This coupled with a headset that’s light, easily adjustable and comfortable even after long sessions, the VIVE Pro 2 has established itself as the benchmark for high-end VR experiences.

The first thing I noticed when I started using the VIVE Pro 2 is how comfortable it is. VR headsets are usually incredibly unwieldy things. You’re essentially strapping yourself to a computer by your forehead, but after a few minutes I lost the sense of being tethered altogether.

Any of my best friends or indeed primary school bullies will tell you that I have a huge head. This has often been the downfall of my attempts to use VR or indeed, buy hats. However, the VIVEPro 2 is not only adjustable enough to fit around my significant napper, but also roomy enough for my huge glasses.

I experienced what I assume most people have had for years, a VR experience without having to squeeze my head into the frame and smash my glasses against my eyes. It’s the most comfortable, adjustable headset I’ve ever used. It feels so, so premium. 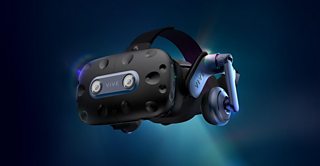 You’ll need a pretty powerful PC to get the most out of the VIVE Pro 2, but if you’re interested in the headset, you probably already have a significant gaming PC. This isn’t an entry level device and the price point, £1299, makes sure of that. However, those who already own the original VIVE Pro model are able to upgrade for a reduced price, as the new HMD is compatible with the old controllers and base stations, a compromise for those who may feel burned by the rapid iteration of the technology. For those looking to get into VR, the price of the headset, plus the price of a PC capable of the top of the range experiences, will be high.

The controllers included haven’t been updated from the current VIVE controller model, but they didn’t need to be. They remain excellent in terms of build quality; however I did find them running out of charge slightly more frequently than I would have liked.

There are a lot of wires. A lot. There is just no way a headset this powerful could be wireless, if that was the case it’d be so heavy it’d be like strapping a bowling ball to your face, but the sheer amount of set up is slightly off putting.

My issue with these high-end headsets has always been the space required to use them, and the awkwardness of tidying them away. Unless you have a set up built for VR, or you use VR daily, finding a place to put all of the cables and sensor boxes required to make the thing work is going to be an issue. 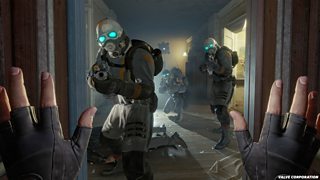 I primarily tested the headset while playing Half Life: Alyx, the absolute benchmark for VR games and an experience that no other developer has come close to matching. It plays flawlessly and the expanded field of vision only improves the experience visually. This is still the game to give to VR skeptics, but unfortunately, outside of Alyx, it’s quite a drop in quality to the next VR-only titles. It’s obviously great that there’s such an amazing 10/10 game to play, but for those that have invested, what you play after that doesn’t have such an obvious answer.

Games like SUPERHOT and No Man’s Sky are still great, but there’s only so many times I can play them without yearning for a new experience on these machines. Interestingly, when watching me use the headset, the thing the people around me enjoyed most was Google Earth VR. It’s exactly what it sounds like, you can drop yourself into Google Street View anywhere in the world and have a look around. Connecting my PC to the TV and having people shout out where they wanted to see was a great way to spend a night.

The VIVE Pro 2 seems aimed at the most dedicated of VR evangelists and in that way it succeeds massively. If I had a dedicated space, and the software was more plentiful, this would be the headset that finally had me hooked on VR, because from a comfort, weight and visual quality perspective, this is the VR experience I’d always dreamed of.