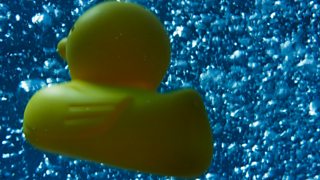 When a container of bath toys, including yellow rubber ducks, fell into the Pacific Ocean in January 1992, it allowed scientists such as Curtis Ebbesmeyer to gain insight into the hidden world of ocean currents. Over the years, the ducks washed up on several different continents, revealing a worldwide network of currents, that had been invisible. The duck’s story led to a greater understanding of how all our seas are connected and seemed, to the Blue Planet II team, an inspiring story to re-tell.

Curtis is a pioneer in following the paths of floating objects on the ocean and has even coined the term ‘Flotsametrics,’ which underlines the importance of measuring where flotsam goes, to help us understand how the sea works.

Over the next 25 years, the plastic toys washed up all over the world. Many landed on the coast of Alaska, some went south to Australia, and remarkably some even went through the Arctic ice via the Bering Straits, to pop up in the Atlantic years later. One of the bath toys even landed in Scotland and it’s thought that today as many as 2000 remain at sea spiraling around in circular currents called ‘gyres’, still sometimes landing on shores from Alaska to Japan. Many have been found intact, hardly even bleached, years after they entered the sea.

What all this tells us is that all the world’s oceans are really one big connected system, and that plastic persists for a very long time (some people estimate at least 500 years, and there are reports of plastic parts from WW2 battles that have been at sea for more than 70 years). The ducks also tell us that we are connected to everywhere in the Big Blue ocean, and that a piece of plastic dropped at the coast might well end up thousands of miles away in the most remote parts of our planet, to potentially wreak havoc to marine creatures - no doubt not the intention of the careless litter bug. 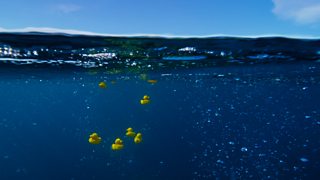 Reconstructing the release of these ducks presented the team with a fresh challenge. While we wanted to tell their story, the team was also well aware of the ironies of putting plastic ducks in the sea. We were used to removing plastic from the ocean, and if we were to introduce any ourselves, we’d need to be very careful to make sure every single one was collected again afterwards.

To film the re-enactment of the release was the biggest challenge, as part of it meant we’d need aerial drone footage of all 250 of them floating in the middle of the open ocean, and most importantly collect all 250 again. We were 30miles off the coast of Costa Rica with several large nets, an enthusiastic team and a drone with its pilots Mark Sharman and Jack Delf. We were always vigilant to collect every single duck. We counted them out and we counted them all back in again, returning to the UK with all 250 – well, except the few the Costa Rican team wanted to keep as souvenirs of a very unique part of the shoot!