How to survive the afterlife like an ancient Egyptian

In many ways, humans haven’t changed much over millennia. In Ancient Egypt, as within many major religions today, people expected to be judged after they died.

On the other hand, humans have changed radically since 1700BC when people believed that after death their heart would be weighed against an ostrich feather. If the heart was heavy with impurities, they would be devoured by a hybrid lion-crocodile-hippopotamus demon.

My heart lightens listening to the Book of the Dead

The ancient Egyptians weren't obsessed with death. They loved life and wanted it to continue in the afterlife. They hoped to be reanimated after death and do all the things they could do while alive – breathe, speak, eat and move. Here are some of the props and practices they employed to help them on their journey into the afterlife:

The ancient Egyptians weren't obsessed with death. They loved life and wanted it to continue in the afterlife

The Book of the Dead contained all the spells, tips and tricks any Ancient Egyptian could need to survive the afterlife. It started as a disparate collection of carvings in tombs before being formally collated and written down on papyrus scrolls, many of which still survive in more or less mint condition.

Magic was used in everyday life in Ancient Egypt, so it follows that when people were leaving this world, they didn’t want to be caught short without the right words to get them through to the other side.

Ancient Egyptians wanted to go to the afterlife in one piece, with no parts missing. This is why the elite, who had the means to do so, would mummify their dead. They wanted to get the whole person plus their identity into the afterlife while the body stayed in the tomb.

For those who weren’t part of the mummified elite, the body would still need some form of wrapping to help preserve it in order for the dead person to progress.

Listening to @BBC In Our Time on the Egyptian Book of the Dead. It's very much a D&D episode. Spells! Rituals! Travel to the underworld!

More common than mummification was the ritual of bodies being placed in pits next to objects which would help them with some aspect of the afterlife.

Naturally, people were going to get hungry after they died, so if they were going to be buried with anything, a few pots were seen as the absolute basic Ancient Egyptian burial kit.

Pots were associated with the ability to eat post-death and also with food offerings to the gods, which were believed to help the dead during the afterlife.

These objects were very important in the process of transformation because Ancient Egyptians believed they had magic powers.

The heart was thought to be key to faring well in the afterlife and in some tombs heart amulets made of green stone were placed on the dead body’s chest. The amulets had spells on them which would help when the heart was being weighed in judgement. 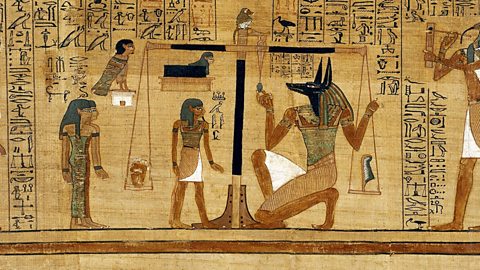 The weighing of the heart

As well as the pictures, there were often maps in the Books of the Dead, so the deceased would be able to navigate their way around the underworld. If they were anything like me, they would still manage to get lost and need to ask for directions, but I’m not sure if that would have been an option, really.

No matter how quixotic their death beliefs were, in Ancient Egypt there was no release from the mundane aspects of life even after you died.