Plant detectives: How bramble and co. can help solve crimes

To make a contemporary detective series you are going to need a maverick cop, brought back after some misdemeanor, partnered with someone incongruous. Then you’ll need some kind of gimmick like a vintage car, an obsession with jazz… oh, and some brambles. Or possibly nettles. 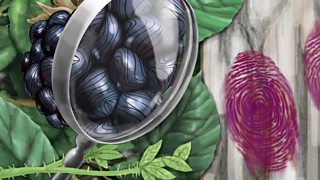 Forensic botany, or the study of plants and pollen in an effort to build the story of a crime scene, is a relatively recent discipline.

One of the first cases in which it played a role was the kidnapping of Charles Lindbergh's son in New Jersey in 1932. A homemade wooden ladder was left at the scene and the US Forest Service identified the wood and where it had been acquired. Sadly, this was too late for Lindbergh as his son’s body was found two months later but it was the first occasion in which botanical testimony was given and accepted in US courts.

Dr Mark Spencer, who looks after the plant library at the Natural History Museum, also works in forensics and uses his knowledge of brambles, nettles and other plants to help investigate serious crimes.

‘Brambles often grow in places where people have done bad things to other people so we often find them on roadside verges and industrial estates for example where someone may have committed a crime,’ he says.

‘If a body is left or buried and lays undiscovered for months or even years, vegetation will regrow,’ says Dr Spencer. He uses his knowledge of the distinctive growth pattern of brambles to help establish how long the human remains have been at the scene. Nettles are also an excellent provider of clues. Their regular rate of growth and routine root structure gives investigators a handy framework on which to base their time of death estimates. Pollen on a victim's body can provide clues

Pollen can also tell a story. A collection of pollen on a victim’s hair, clothes and skin can link them to a habitat or an area, giving investigators an indication as to whether the body had been moved or where the crime took place. The presence of pollen from plants like irises, sedges and bulrushes would indicate water nearby.

Knowing the order in which different plants become established can be valuable when trying to find hidden graves. Disturbed soil is quickly colonised by pioneer species and then later by succession species. A patch of woodland or habitat in which pioneer species are prevalent could suggest that the earth has been disturbed. These regrowth patterns may still be identified many years after the event.

Water-based plants can also provide clues. Algae and diatoms in water can be identified and matched with those found in a victim's lungs. The presence of diatoms in the major organs can be used to help establish whether a person drowned.

It may not be appear as exciting as TV detective work, but the botanist can be as valuable as Inspector Morse. Inspector Gorse anyone?