Desert Island Discs Challenge and how to choose your list

Can you pick your Desert Island Discs? Those eight must-have tracks you'd want if you found yourself marooned. With so many of us feeling more isolated than usual, that’s just what Radio 4 is challenging you to do.

Pick your favourite eight tracks, one book and a luxury item that you’d want with you on a desert island. Share your list on social media with the hashtag #DesertIslandDiscsChallenge and nominate eight of your friends to do the same. 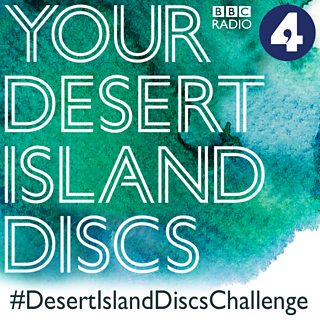 It sounds simple, but guests on Desert Island Discs almost always complain about how hard it is!

What are the bits of music that help you through the hardest times? And what are the songs that remind you of the people you love?

Take your time and have a proper think, and read the production team's 10 tips to choosing your eight pieces of music – with hints and tips from the likes of Tom Hanks and Zoe Ball – below.

When you are ready, share your list of eight discs, one book and a luxury item on social media with the hashtag #DesertIslandDiscsChallenge – and tag the eight people you want to share theirs too. It’s a great way to find out more about your friends, your family or even your colleagues.

And don't forget to star your favourite piece - the one track you'd save from the waves!

We've made some templates that your can fill out for your posts too: 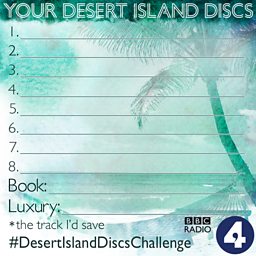 10 tips to help you choose Your Desert Island Discs

So out of the thousands of pieces of music you’ve experienced throughout your life, how can you select just eight? Here’s some advice from the Desert Island Discs production team.

1. Create the soundtrack of your life

We always suggest that our castaways should think about music of real significance across the whole of their lives - so start young. What was popular in your home when you were a small child? What are your first musical memories? Perhaps you were influenced by older siblings, or grandparents, or a moment at primary school.

Zoe Ball, cast away earlier this year, remembers singing along "at the top of [her] lungs" to one of her dad’s Barbra Streisand LPs at the age of eight - not understanding the songs, but beginning a lifelong obsession with Barbra and her music. 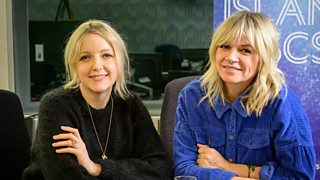 And Ruth Jones, co-creator of Gavin and Stacey, drew on an equally powerful childhood memory when she chose Max Boyce’s Ballad of Morgan the Moon: "The whole class dressed up as rugby supporters and Helen Shepherd got to carry the giant leek, which I have still not forgiven her for. I think perhaps that was one of my earliest memories of wanting to perform. I wanted to carry that giant leek, it wasn’t fair!"

Most castaways find it difficult to narrow down their choices to just eight. Many get stuck at 10 or 12, and feel like giving up. Others change their mind on the day of the recording. So take your time, draw up a very long list and then start to work out the tracks which mean the most. And these desert island discs are single songs, not albums!

3. Let your heart rule your head

Faced with the loneliness of a desert island, many castaways decide that they need music to reunite them with the most important people in their lives.

No one has described this better than Tom Hanks, cast away in 2016: he said that his tracks gave him "an unspoken before and after emotional connection - you remember where you were and what you were doing and what your place in life was… You can see the people that you loved and the people who’ve gone away as well as what you learned about yourself."

4. Do have second thoughts

You might turn first to the most played songs on your phone, or music mixes you listen to regularly at home - but are they right for your desert island? 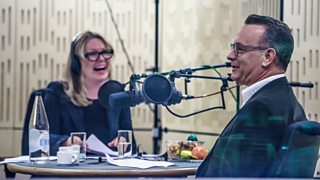 Former presenter Kirsty Young with Tom Hanks, a guest in 2016

Thom Yorke, of Radiohead, first thought he would mainly choose experimental "electronic stuff" when he was cast away in 2019. But he soon realised that the sound of the human voice would be more consoling, and one of his final choices was Nina Simone’s recording of Lilac Wine: "If I’m on a desert island I need Nina Simone there with me singing this song because there’ll be moments when things are really, really dark, and you need someone to remind you that they’ve been through that. But it’s also a song where you can wake up in the morning and rise with it, and [know] that we share the same kind of feelings and emotions - and all in three minutes."

Take time to think back precisely to particular moments in your life and the music you heard at the time - and you might be surprised.

When journalist Dorothy Byrne wanted to conjure up the many hours she spent driving her very young daughter around, she recalled that "just one piece of music [would] keep her quiet - I hated it but it would definitely remind me of her." It was the nursery favourite The Wheels on the Bus. It was the first time the song had appeared on Desert Island Discs, but on social media numerous listeners shared the memory of hearing or singing this song - over and over again.

When the footballer Ian Wright was cast away his first choice was an aria from Mozart’s Marriage of Figaro, because it immediately transported him to his matchday drives to Arsenal, when this piece created a moment of calm ahead of the game - although he admitted that by the time he was close to the stadium, he’d be "probably blasting out The Prodigy or something like that."

6. Remember the power of music to uplift you

Many castaways select songs guaranteed to lift their spirits, for the times when their desert island feels more like a prison than a tropical paradise. Actor Daniel Radcliffe chose Morecambe and Wise’s classic Bring Me Sunshine, for the simple reason that "it’s going to make me happiest when I need it." 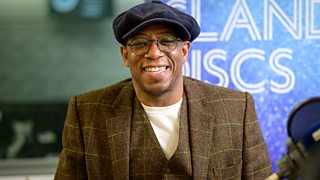 Footballer Ian Wright appeared on the programme in 2020

7. You’re not making a mixtape

Don’t worry if your final list looks like a random collection of unrelated tracks, rather than a coherent sequence of carefully curated music. This is your personal selection, and many editions of Desert Island Discs feature a vast range of music.

The screenwriter Russell T Davies, whose credits range from Doctor Who to Years and Years, included Three Wheels on My Wagon (the first record he owned,) a moment from Leonard Bernstein’s Mass (to recall his days in a youth theatre company) and ELO’s Mr Blue Sky (the play-in music for his wedding) along with music from his Manchester clubbing days and a favourite song from the 1970s TV drama Rock Follies.

Choose the music that matters most to you, rather than worrying about what others might think. Kirsty Young, presenter of Desert Island Discs from 2006 to 2018, expressed this most unequivocally, when asked by Radio Times in 2017 if she regretted the increasing amount of pop music in all its forms on the programme: “We’re going to play that stuff, because it’s important to people. What we do is reflect; we’re not there to make the medicine go down.” But isn’t Mozart intrinsically more important than, say, the Smurfs? “Absolutely not. If people want to choose the Smurfs, then Smurf away.”

No one has chosen the Smurfs on Desert Island Discs - yet.

9. And once you’ve chosen your final eight...

An even bigger challenge: which one disc will you dash to save when the waves threaten to wash your much-loved choices away? And finally... 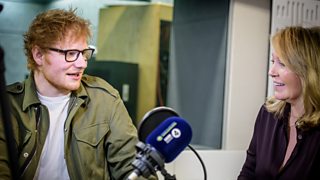 10. Choose a book and a luxury

You will find the Complete Works of Shakespeare and a copy of the Bible or your choice of sacred text waiting for you on your island – and you can choose another book. It could be something you’ve always wanted to read, or a lengthy classic to while away the hours. Princess Margaret, George Clooney, Terry Wogan and Debbie Harry all chose Tolstoy’s epic War and Peace. Or it could be a book you’ve always loved, or something to make you laugh – recent choices have included Alice’s Adventures in Wonderland, and Roger’s Profanisaurus, written by the creators of Viz comic and selected by Stephen Merchant.

And then you must choose a luxury – something to make your time on the island more pleasurable, rather than anything too practical. Over the decades, pens and paper, coffee, tea, wine, photo albums, musical instruments, telescopes, beds, pillows and baths have long been popular. Theatre director Marianne Elliott requested a bath with three taps: hot and cold water and wine. It can be a simple, everyday pleasure – Ed Sheeran asked for a lifetime’s supply of ketchup - but here are five luxury requests which might spark some ideas of your own:

Sue Perkins – a hair of her deceased dog, Pickle (her book choice was How to Clone Your Dog)

Hugh Laurie – a double set of throwing knives: "To be able to knock the pip on an ace of spades at 20 paces would be a great thing"

Kathy Burke – life-size laminated photo of James Caan from Dragon’s Den: "I’d like it laminated so I can body surf on him"

Post your picks now using the hashtag #DesertIslandDiscsChallenge and tune in to a special edition of Your Desert Island Discs on BBC Radio 4 on Friday 5 June at 9am.