How do I get rid of dandruff?

Dandruff is, perhaps surprisingly, mainly caused by a fungus which most of us have living naturally on our skin, but which causes problems in about half of us. A third of sufferers have apparently avoided a social occasion because of the embarrassment it causes! But fear not – there are some ways to combat it. 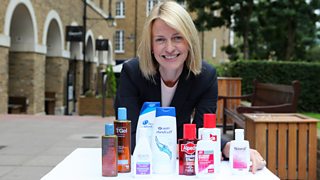 The fungus that is the principal cause of dandruff is called Malassezia globosa, and it feeds off the oils on our skin and hair. But when it does so, it produces oleic acid, which can irritate our skin. In some people, this sets off an immune response which can lead to a rapid turnover of skin cells. Air pollution can make this response worse, whilst UV light from sunshine can help dampen it down.

To get rid of dandruff then, adding oil to your scalp is no good at all – washing off the natural oils that Malassezia feeds on is more likely to help. However, there are some chemicals that can help kill it off too. The most effective anti-fungals are miconazole and ketokonazole. Ketokonazole is found in some shampoos, but miconazole is currently only available in skin creams (and some pet shampoos!).

You may find, though, that the effects of an antifungal shampoo wear off after a while, so you might need to cycle some alternatives. Coal tar shampoos can slow down skin turnover (although they may discolour fair hair), and shampoos containing salicylic acid can help get rid of the flakes. However, shampoos containing zinc or selenium can also target the fungus, so there are a wide range of solutions to try.

Researchers have now sequenced the genetic code of Malassezia and are working on more specific targeted drugs to kill it – a group of drugs known as sulfonamides work against it, but nothing containing them is yet available for dandruff.