"Kip wasn’t going to cry because she is not that kind of girl."

"David Hare sent me the script and I loved reading it, I thought it was brilliant and I really wanted to play Kip from the get go. 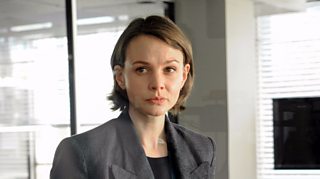 It is great to be a part of a project which starts conversations; you want to be in thought-provoking work.
Carey Mulligan

"I had worked with David previously in Skylight, so we knew each other really well. With David’s background in theatre, he has such a great understanding of character and of the story arch and it was interesting, it being his first time writing a series, because it feels so brilliantly structured for episodic television.

"Then I met SJ Clarkson, the director and I loved her; I am such a big fan of her work. SJ had this incredible energy, which made me very excited to be working with her on this project.

"Then this incredible cast formed around it which was amazing, but also a bit of a regret about this project as there are so many amazing actors in different parts of the story who I never had any interaction with. I never have anything to do with Billie Piper, which was a massive sore spot for me because I think she is brilliant.

"I was also excited to do something contemporary, having done a fair amount of period dramas. I wanted to play a character who is alive right now, not 100 years ago.

"This drama just felt very different to anything else. There is an exciting pace to the writing and I liked the multi-narrative and the way it weaves so well in and out of so many different people's lives and throws a lot of people’s perspectives at you. It really was a dream job and it is always an honour getting to work with David Hare."

"Kip is practical, and she is ambitious. She is very decisive and doesn’t feel the need to air her views or ideas to lots of people. She keeps her own counsel, as she believes that she works best alone, even if that may not necessarily be the case. 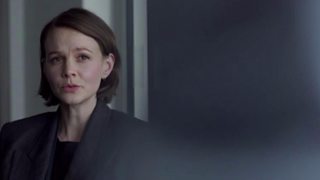 "She has a sort of struggle between wanting a classic, domestic scene at home and being a mother but also wanting to rise within her work. Kip is very good under pressure and she likes being in charge, which is really fun to play.

"I loved that as there were definitely a couple of moments where it could have happened but we just said no, that isn’t in her. That is just not how she is made up, she is not emotional in that way. That doesn’t mean that she doesn’t feel things and isn’t deeply connected to the people she is working with and those she is trying to help, she is just not a crier. And she doesn’t whinge about being pregnant which I love."

Carey on the impact her pregnancy had on filming

"I came into the rehearsals of Skylight when we were transferring to Broadway and told David I was 11 weeks pregnant so he was used to this from me!

"With Collateral, I wrote back to David to tell him I was very interested in this project but also that I was six weeks pregnant. He was totally happy and said he didn’t see why Kip couldn’t be pregnant. He barely changed a thing and only added two references to the pregnancy in the entire show. We just put a bump in and got on with it and as my real bump grew we just took away the fake bump. I love that because pregnant women don’t go around all day clutching their bellies, they are working women and they just get on with it.

"Other than the fact I was hungry all of the time, the only moment being pregnant affected me was right towards the end of the shoot when I was about seven months along. We were still doing full night shoots where we would be sitting in a car from about 6pm until around 4am and it was just sitting down for that amount of time, being kicked by a baby and you suddenly remember oh yes – I’m pregnant!"

"There is a bit of a resentment between the two of them because Kip went through a university graduate programme where she was able to rise quite quickly and Nathan didn’t and so she has been promoted above him and he is her subordinate. They naturally get on quite well but their ethos towards work is very different.

"Nathan is a lot more of a by the book officer and Kip believes in bending the rules to do the right thing. She would never do anything terrible or illegal but she is going to put her neck on the line if she thinks the result could be big enough. Whereas Nathan is a grafter and wants to rise and wants to do well and so he follows the rules. Although they disrespect each other at certain moments, there remains a real fondness for each other.’

"The way SJ shoots everything makes it feels like you are watching something on a much bigger scale. There is a cinematic quality to it, it feels much bigger. The scale of the subject we are talking about also enhances that, this isn’t a single family story, it is about so many bigger issues.

"It is great to be a part of a project which starts conversations; you want to be in thought-provoking work. First and foremost it is a great story and you want to be part of one of those shows which people binge watch. If people are dying for the next episode to come out that would be my dream end result."