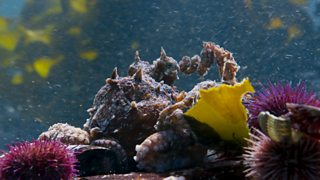 One of my favourite animals in the film has to be our little female common octopus who turned out to be a genius in the art of escape… Just as well, as she lives in an undersea kelp forest that is just packed with predators.

The kelp forests off the southern tip of South Africa are fed almost constantly by two vast deep sea currents which deliver nutrients year round. As a consequence they are incredibly productive, providing rich hunting grounds for the octopus but also support vast colonies of fur seals and other predators that are as likely to find the octopus a tasty morsel. Over 100 different species of shark are found in South African waters, one of the highest diversities in the world, but there is one in particular that is very good at hunting in even the thickest tangles of the kelp - the pyjama shark.

With such intense predatory pressure an octopus needs plenty of strategies to avoid becoming the prey while it’s out hunting itself. They have the most remarkable ability to change the colour and texture of their skin to reflect their surroundings but they are also brilliant at mimicking the motion of the kelp and moving with the fronds to hide their progression as they sneak through the undergrowth. From one moment to the next they might transform from a mottled rock, complete with the texture and colour of the spikey urchins sitting on it, to a golden wafting kelp frond… If spotted and feeling the need to retreat they can squeeze down into the tiniest cavities between the rocks, restrained only by the size of their eyeball – the only part of their body that cannot be squeezed smaller. 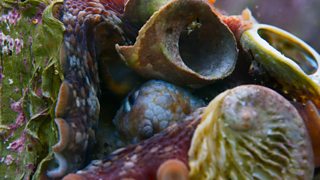 Local naturalist, Craig Foster, dives the Cape kelp forests every day and has done so without fail for seven years. By doing so he worked out how to track a hunting octopus and so Blue Planet II cameraman, Roger Horrocks, and assistant producer, John Chambers joined Craig down in the marine forests to attempt to film a wild octopus on the hunt. They worked for over a year getting to know individual animals in the area.

Assistant producer, John Chambers, “Roger and Craig initially embarked on a year of filming, building trust with the individual octopuses and getting to know the octopus’s predators as well. We needed to get big cameras into the water with shy animals and this took a long time”. One animal in particular, a small female seemed particularly bold, accepting Roger and Craig as they followed her through her territory but they were soon to discover her real skill was in avoiding becoming prey herself.

Assistant producer, John Chambers, “our ‘star’ octopus was attacked by a pyjama shark. They have a phenomenal sense of smell and they’re always looking for clues that octopus are hunting. In this instance, the shark came in, grabbed the octopus, and the octopus fought back – this very vulnerable chunk of fleshy, tasty protein. This wasn’t what we were after at all! We’d been filming for a year by this stage… I thought, ‘great, this is our star getting eaten, in front of me’. But then I saw that the octopus had its arms and legs going in to the mouth of the shark and out of the gills, starving it of oxygen. Eventually the shark had to let go and bumped its head as it swam off being so disorientated.” 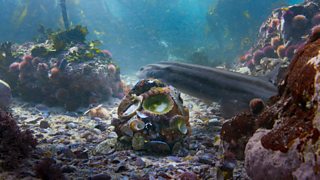 Filming this astounding defence behaviour was remarkable enough but the octopus was yet to reveal her most incredible trick. Behaviour previously unknown to science, witnessed and filmed for the very first time by the team, the little female octopus quickly grabbed up as many shells as her suckered arms could grasp and curling her arms up around her body created a camouflaged armour of shells and stones.

The ‘shell suit’ seemed to be perfect at confusing the shark enough to prevent a full attack, and when the shark does attempt to bite, the octopus can simply drop the shells and make good its escape. The confused shark is simply left sniffing around the discarded shell pile. Such a complex use of the shells to create a temporary protective barrier is a testament to the ingenuity of this little cephalopod and I was very pleased to open the film with such a clever and fascinating animal. 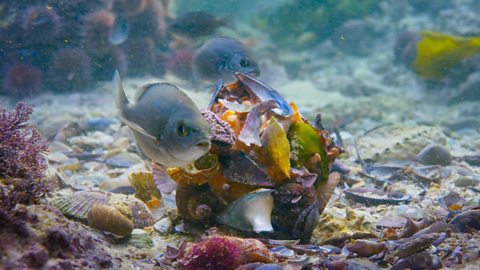 This cunning octopus creates a protective suit of shells to hide in plain sight.