Whether in fervent dedication to a team or as an excuse to escape the family after Christmas Day, watching a football match on Boxing Day is a long-standing British tradition. This year there is added significance to the custom as it marks the centenary of a pioneering match. On Boxing Day 1917 two teams of women, one from England and one from Ireland, faced one another on a pitch in Belfast. It is the earliest record of international women’s football but it has not gone down in history.

In their History of Women's Football the Football Association (FA) lists a 1920 fixture between an English club side and a visiting French team as the first international women’s match. It is hard to be sure exactly why the 1917 Boxing Day match has been overlooked. An FA spokesperson said it may be because it was not recognised by an official governing body. This is likely as during the First World War the women’s game grew organically from groups of women working together in places like munitions factories. The 1917 Boxing Day match was also not part of a league or tournament but an exhibition match which was the finale of a three-day programme of events.

Nevertheless it was the highest level women’s match to date. Patrick Brennan, author of The Munitionettes, said “matches prior to the 1917 Boxing Day game were played between teams in the same general locality”. Mr Brennan has unearthed newspapers from the time which describe the match as “international” and report that it attracted 20,000 spectators. The Lord Mayor of Belfast kicked off the match which, as was common for the time, was held in aid of war charities. "Great excitement was first raised when the Irish front rank came along in great style and narrowly failed to score", said The Belfast Telegraph.

The match was played at Grosvenor Park in Belfast, which was home to the Distillery football team. Now called Lisburn Distillery Football Club, its secretary Colin Hopkins said the two women’s teams that they hosted in 1917 were named the North of Ireland Ladies and the Tyneside Ladies. “There was no Northern Ireland then, it was all one country so the name of the Irish team suggests that the players were all from Belfast and surrounding districts”, he said.

The Belfast Telegraph from 27 December 1917 lists the players for each team. The Irish players appear to come from two existing teams, the Lurgan Blues and the Belfast Whites, whereas the English team has been drawn up from a larger pool of established sides.

Football had been encouraged among women working in munitions factories to counter the unhealthy working conditions and by 1917 there were enough teams in the North East of England for a tournament. Known as the Munitionettes Cup, the competition was open to any women's team in the Tyneside area. According to Mr Brennan, it was the organisers of this contest that hit upon the idea of putting on an international women’s match. They had so many Tyneside players to choose from that a trial match had to be held; the Possibles versus the Probables.

How the 1917 Boxing Day match came to be at Distillery’s ground in Belfast is undoubtedly down to one man, Bill McCracken. Considered a legendary figure in the footballing world, McCracken invented the offside trap, a tactic which forces the opposing team to break the offside rule. (It was so effective the official rules of the game had to be changed.) “McCracken had been involved in the staging of men’s charity games since the beginning of the war, and had an open-minded attitude to the women’s game”, said Mr Brennan. McCracken played for Newcastle United for 19 years and is listed in the club’s Hall of Fame. But he started his career at Distillery in Belfast.

Season 12 of Home Front, which is set on Tyneside from 13 November 2017 to 5 January 2018, features a munitionettes football team and brings to life Bill McCracken’s search for players to face the Irish side on Boxing Day 1917. 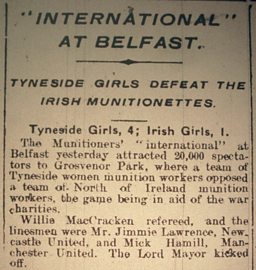 The English players were given programmes for the visit to Belfast and Mary Dorrian’s surviving copy reveals they had a busy schedule. So much so that the front cover remarks that “Ladies are requested to pay attention to the Time Table”.

The English team set off for Belfast from Newcastle Central Station at 12:30am on Christmas Eve. After almost 11 hours travelling they were straight into their organised activities which included watching a local football match, visiting the Ulster Volunteer Force Hospital which treated injured soldiers, as well as going to the Imperial Picture House and the Belfast Hippodrome. Christmas Day followed with watching more football and attending a dance in the evening. Then finally on Boxing Day morning the time came for the women’s match.

Mr Brennan believes the 20,000-strong crowd would have had a clear allegiance. He said, “as few Tynesiders would have been able to make the trip under wartime conditions the support would have been very one-sided in favour of the Irish team”. Hopefully Bill McCracken put any loyalty to the English team before kick off - he was the match’s referee. The final score was 4-1 to the English side. “I think the result could have been predicted”, said Mr Brennan, “I think the Tyneside Ladies had been playing a lot longer than their opponents”.

From 1917 women’s football continued to grow in popularity and draw big crowds. But this was brought to a sudden end when the FA banned women playing football at the end of 1921. With the end of World War One, men were back home and there was a push to resume life as it was before the war began. Women lost their wartime jobs and their places on the football pitch. Fifty years later the FA's ban was lifted and the women’s game began its return.