One of the most ambitious and ultimately magical shoots of the entire series was trying to capture the mass spectacle of glow worms in a dark, wet forest.

...although their bioluminescence is easy for a human eye to see, it is very hard for a camera to capture.

These constellations of living fairy lights are perhaps the most fantastic and ethereal of all New Zealand’s wild attractions. The problem is capturing the magic of a glow worm colony is about as hard as trying to film real fairies at the bottom of the garden!

The first challenge is that they switch on their lights in the dark and although their bioluminescence is easy for a human eye to see, it is very hard for a camera to capture. The determined camera team of five spent 23 nights in the cold dark damp forests. They checked out 20 possible locations until they found just the right one about half an hours walk from the nearest road.

Of course they had to stay up all night, so sometimes used people who had just flown in from Europe as their body clocks meant they were “nocturnal” in New Zealand – at least for a week or so!

Once at the glow worm location, the team worked through night shoots of 2-5 days each time and should have bought shares in coffee companies thanks to the amount of caffeine that was consumed.

Their equipment list reads like a Hollywood studio, with time-lapse units, special lights, tracking systems, turn tables, camera cranes, about five kinds of normal camera, special lenses, a fancy new light sensitive camera and tiny LEDs. After so much effort they were lucky if they recorded a few seconds of good footage per night: All for one two and a half minute sequence!

While walking through the night forest, cameraman Alex Haßkerl got his eye pierced by a twig.

Rob and the team had to almost work in the dark too, as they found out that, strangely for creatures who shine, glow worms are somewhat light shy!

“One funny thing was, once we arrived at a location, we saw massive amounts of glow worms but only 15 minutes later, when all the cameras where ready and in place, the magic was gone - hardly any worms were visible. For a while, we did not know why..... but then we realised, If we put on our head-torches to install the TL cameras, tripods and lenses the majority of the worms stopped glowing - maybe they have been intimidated by the big glow worm (our torch) or maybe they thought it's day again... who knows.

After we figured that out, we approached the places in darkness and set up all the equipment in absolute darkness or minimal light by phones etc. That took a while... if you have to operate in millimetre distances to get the focus right.

I think the ratio of "time used in the field" and "footage on hard-drive" was the worst in the whole project. After 5 people spent a whole night out in the bush fiddling around in the dark, we captured about 5 seconds of useful time-lapse material - and that is only if the rain did not destroy everything half way through."

While walking through the night forest, cameraman Alex Haßkerl got his eye pierced by a twig. He was half blind for two weeks, but luckily for the glow worm shoot, three-dimensional vision was not needed, and luckily for Alex, his eye healed fully. The other surprising fact about glow worm visibility is that despite the fact that each is only a few millimetres long; you can see the light from a single individual from around ten metres away. 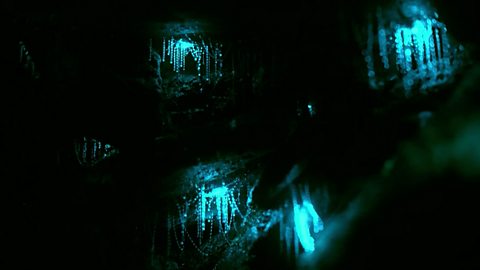 Glow worms create their own starscapes to lure unsuspecting victims

When night falls the ingenius gnat larvae traps are revealed in all their glory.