The famous stage direction ‘Exit, pursued by a bear’ from Shakespeare’s The Winter’s Tale is used for comic effect now but literature and folklore have had a close and evolving relationship with bears for centuries. Pre-Christians and Celts worshipped them, they became our amusers in the 19th Century and then their small furry representatives became a mainstay of nurseries. What's the bear appeal?

King of the nursery

As the silent, forgiving, cuddly recipient of our affection, the toy bear with his button nose and beady eyes has been popular since the beginning of the 20th Century. 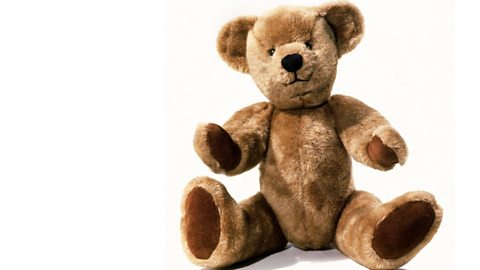 How the teddy bear got its name

Catherine Howell from the V&A Museum of Childhood explains the origin of the teddy name.

But why bears? Why aren’t children sharing their duvets and secrets with cuddly foxes or fluffy squirrels?

Catherine Howell, from the V&A Museum of Childhood, says that as the earliest toy bears would have been stuffed with wood shavings and therefore less than soothing to stroke, it is the bear’s face that seems to appeal to us.

Like dogs and cats, bears have forward-looking eyes, rather than the monocular vision of rabbits for example, which makes us relate to them as more human-like.

Bears also have an oddly human gait when they walk upright. Bear cubs have rounded limbs, rather like human babies, and stand up when they wrestle which gives them a toddler-like appearance.

The beginnings of our association with bears were more spiritual. In the pre-Christian era, bears were worshipped.

Arctolatry, or bear cults, may have been in existence since the Paleolithic period. Bear bones and skulls have been found arranged in caves, which may indicate some sort of ceremonial rite. The Ainu, inhabitants of the Japanese archipelago, use the word 'kamui’ for bear, which means god.

In the Grimm’s fairy tale, sisters Rose Red and Snow White share their home with a bear, which inevitably reveals itself to be a bewitched, handsome prince. This tale is considered a metaphor for young women learning to relate to men.

Bears were often used for the many retellings of the Beauty and the Beast story - a wild animal transformed by love. That's not to say that bears in stories of this period were entirely noble. In the original version of Goldilocks, the three bears discuss skinning and eating Goldilocks or impaling her on a church tower. But then Goldilocks herself was a hairy old hag in the original story.

Sadly, as Christianity swept Europe, bear-worship was gradually replaced by massacre as the Christians viewed the practice as sinful. ‘Bears were regarded as an impediment to the conversion of pagan peoples,’ says author Bernd Brunner.

In the 19th Century, bears were either hunted and killed or were imprisoned in fairs and menageries. Many accounts exist of the horrible ‘sport’ of bear-baiting, where a bear would be tied up and forced to defend itself from dogs. 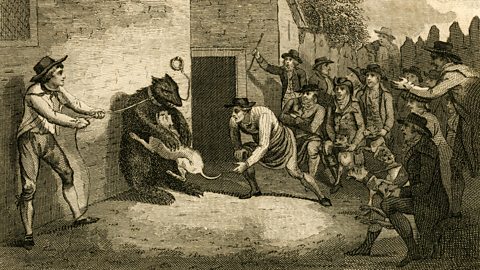 Why was bear-baiting popular?

Prof Erica Fudge explains why bear-baiting was once considered entertaining.

Once the public became used to seeing bears being fed buns and ‘dancing’, they began to be represented in stories as cuddly, more comic animals. Rupert, Paddington and Winnie the Pooh are familiar to us all.

Maybe the idea of the bear as human transformed has stayed with us across the centuries. Narcissists that we are, perhaps we can only feel truly understood by something that we believe is human on the inside.