Karlheinz Stockhausen's masterpiece, Gruppen for 3 Orchestras (1955-57), will be recreated in the Turbine Hall of Tate Modern, with the London Symphony Orchestra conducted by Simon Rattle and broadcast on Radio 3 on Saturday 30 June.

Introducing the work, Stockhausen wrote: "When I was composing Gruppen, I had a little room in Switzerland for three months, and there was a small window in front of my desk through which I could see the incredible shapes of the mountains on the other side of the valley. Whole envelopes of rhythmic blocks are exact lines of mountains that I saw... in front of my little window."

What is going on in the score?

Within its three orchestras, the "normal" range of orchestral instruments – strings, woodwind and brass – is supplemented by great arrays of percussion, including marimbaphone, Glockenspiel, cowbells, tamtam, African slotted wood drums, tomtoms and bongos.

Stockhausen characterised the music thus: "From time to time the two or three groups come closer and closer until they meet in the same rhythm of sound and become transformed. One receives the other into itself. Or plays with it. Extinguishes it. They fall apart or cling together. Or they coalesce..."

Veteran Boston Globe critic Richard Dyer attended a performance at Tanglewood in 1993: "Hearing parts of it is a visceral experience, but the piece is also subtle and the listener becomes aware of the awesome precision of Stockhausen's ear and imagination, of a vein of lyricism, a sense of whimsy amid the intensities and explosions, and even of a sense of fun."

How was the piece received?

Gruppen has been hailed as "a landmark in 20th-century music... probably the first work of the post-war generation of composers in which technique and imagination combine on the highest level to produce an undisputable masterpiece."

Conductor Simon Rattle has form with Gruppen, which lends itself to large spaces such as Tate Modern, where the players are surrounded by the audience: he conducted a memorable performance in 2008 in an abandoned hangar in the old Berlin airport, and sharing the conducting of the subdivided Berlin Philharmonic with Daniel Harding, and Michael Boder.

Stockhausen on how to perform Gruppen

Writing in 1996, Stockhausen gave specific instructions about how the work should be laid out and rehearsed, and was quick to identify potential pitfalls: 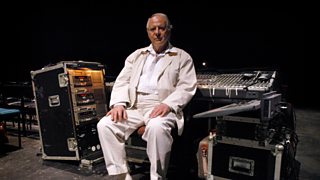 "For all tutti rehearsals, each of the three conductors needs a microphone and a monitor loudspeaker to be able to communicate with the other two conductors, but his own microphone should not be circuited to his own monitor (danger of feed-back). This circuiting must be ready and tested before the first tutti rehearsal.

Sound projectionist for the tutti rehearsals

"During the past several years, I have occasionally participated in the tutti rehearsals of Gruppen from the middle of the hall during the final three days preceding a performance. In the course of these rehearsals, the conductors realised how important it was – and they have suggested for the future – to have a sound director in the middle of the hall who balances the dynamics, communicates with the conductors about other corrections, and, in general, leads the rehearsals, speaking over a microphone, with monitor loudspeakers on each podium.

"One of the three conductors must visit the performance venue when a performance of Gruppen has been definitively planned. He (she) must also have a detailed discussion with the percussionists and check all percussion instruments, celesta, glockenspiel etc. Experience has repeatedly shown that the pitches of the percussion instruments were wrong. In addition, the orchestra parts must be checked by the conductors ahead of time, because every now and then, uncorrected rental material is delivered."

Nonetheless, conductors always need to find their own modus operandi: before the 1993 performance at Tanglewood, Oliver Knussen, Reinbert de Leeuw and Robert Spano even held a number of "silent'' rehearsals, without the orchestras present, so that they could address issues arising from Stockhausen's superimposition of conflicting rhythms in the score.

A typical orchestra layout for Gruppen

A previous performance of Gruppen on Radio 3 was in Hear and Now on 19 October 2013. It was given at the Royal Festival Hall by the London Sinfonietta and the Royal Academy of Music Manson Ensemble, conducted by Martyn Brabbins, Baldur Bronnimann and Geoffrey Paterson. 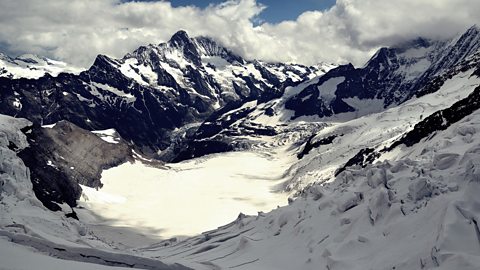 The Hear and Now Fifty - Stockhausen

In this clip, Finnish conductor Susanna Mälkki pays tribute to Gruppen and highlights some of the performing challenges; commentator Paul Griffiths places the work in the context of Stockhausen's early output, and explains how the shape of a mountain view in Switzerland dictated the work's tempo patterns. The clip begins with Stockhausen himself.