Today is Radio 4's most popular programme and reaches more than seven million listeners a week. 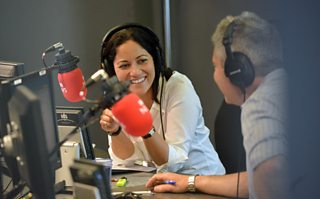 (Picture: A view from the production studio of the Today programme on air.)

Launched on the BBC's Home Service on 28 October 1957, Today presenters have included Jack de Manio, who became its principal voice in 1958.

During the late 1970s, the team of John Timpson and Brian Redhead became an established - and influential - partnership.

Brian Redhead was quoted as saying: "If you want to drop a word in the ear of the nation, then this is the programme in which to do it."

The two presented the show until Timpson's retirement in 1986, when John Humphrys and Sue MacGregor joined the regular team of presenters.
Barry Norman, Desmond Lynam, Jenni Murray, James Naughtie and Anna Ford have all been among the illustrious names to have presented the programme.

Others to have sat behind the microphone include Libby Purves, Peter Hobday and Carolyn Quinn.

Today, the team is made up of John Humphrys, Martha Kearney, Mishal Husain, Justin Webb and Nick Robinson.