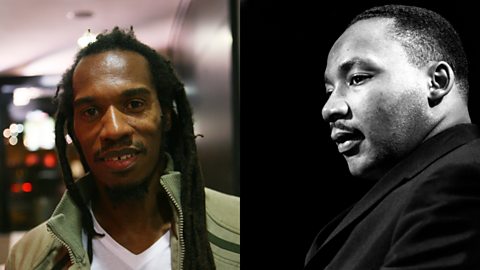 I am here today my friends to tell you there is hope. As high as that mountain may seem, I must tell you I have dream and my friends there is a tunnel at the end of the light. And beyond that tunnel I see a future, I see a time when all people who live on these green rocks we call the British Isles will know the name of Sean Rigg, Leon Briggs, Christopher Elder, Kingsley Burrell, Mikey Powell, Bibaa Henry and Nicole Smallman as well as they know the name of Stephen Lawrence.

I dream of a time when we will no longer feel forced to take to the streets to demand the right to roam the country of our birth without the fear of being dragged from our cars, searched on our streets and humiliated in front of our children. Yes, oh we dream of a time when every white police officer in our land will be taught at schools that black civilisations were as good and as bad as white civilisations. And his civilisation must abandon the cruel legacy of that evil white supremacy. The empire is dead. The empire is dead. Long dead the empire. I still dream of a time when angry white men and angry white women will unite and fight the system that oppresses us all. For we who stand together, win together. We who dream together, achieve together.

I still dream of a time when black people all over this blessed country of ours will play golf. African Caribbean and Asian youth will spend big money on English takeaways. Black people will wear kilts. Black people will speak Welsh. But we are sick and tired of having to prove how British we are.

So let us not wallow in the valley of despair, just be fair. Let’s tell ourselves that all men and women were created equal for the time is coming when those who divide us will be judged by us. We will rise up and demand a true history, true democracy and true racial equality.

We live in a nightmare it seems but I must tell you I have a dream that black people and white people, Muslims and Jews, Protestants and Catholics, Sikhs and Hindus, Pagans and Druids, Atheist and Anarchists will join together and sing free at last, free at last, great Britons we are free at last.

More from World at One