Colour-blind casting: The untold history of Black and Asian Shakespeare

The history of colour-blind or non-traditional casting is a subject seldom explored, but the exhibition To Tell My Story, curated by Professor Tony Howard of the University of Warwick and currently touring the UK with Tara Arts' production of Macbeth, celebrates the ongoing journey of multicultural Shakespeare. NATALIE BUSHE finds out more.

Antony Bunsee as Shylock in The Merchant of Venice, Tara Arts, 2005. Image courtesy of Talula Sheppard.

The exhibition explores the untold history of Black and Asian performers working in Britain, beginning with Ira Aldridge, an African-American who made his home in England and took Europe by storm during the mid-1800s, playing Richard III and Shylock.

By far the most famous name is that of an African-American who became a star around the world but was vilified in his home nation for many years.

When Paul Robeson took to the West End stage in 1930 as Othello he wore the same gold earrings that Aldridge had - a gift from Aldridge's daughter Amanda. A significant successor to Aldridge, Robeson was a star of both stage and screen.

Lauded for his 1930 performance with Peggy Ashcroft as Desdemona, Robeson was the first to really claim Shakespearean roles for black performers. He saw Othello as a role with great dignity, apposite for a black actor to portray.

Not only was Paul Robeson a respected actor and singer, but he was a political being concerned with social injustice of all kinds. Involved in the early civil rights movement and drawn to the political left, this brought him in direct opposition to American anti-communists, and into the sights of Joseph McCarthy.

At the height of his fame Robeson's career was halted. Despite his 1943 Othello being the longest-running Shakespearean play on Broadway at the time, Robeson was blacklisted for his political beliefs and had his passport revoked.

Virtually unemployable in the US, he was unable to work abroad until the travel ban was lifted in the late 1950s.

In the 1960s more black actors appeared in classical roles, followed in1968 by Asian actors, but casting in the 1970s was often tokenistic

Freedom restored, he returned to England and played Othello once again, claiming Shakespeare as a political writer who could throw light on society and the inequities and hypocrisies it contained.

The exhibition charts the changing face of society in UK and reflects on performances by African-American actor Gordon Heath appearing as Othello in Tony Richardson's 1955 BBC production - a role he'd appeared in initially for Kenneth Tynan in 1950.

In the 1960s more black actors appeared at the Old Vic and RSC in classical roles, followed in1968 by Asian actors, but casting in the 1970s was often tokenistic.

It was not until the late 1980s that ethnic companies like Temba and Talawa produced plays and performed the classics with all-black casts, with the subsequent decade seeing an explosion of colour-blind casting. 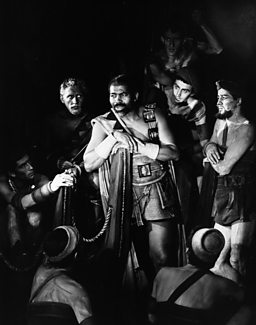 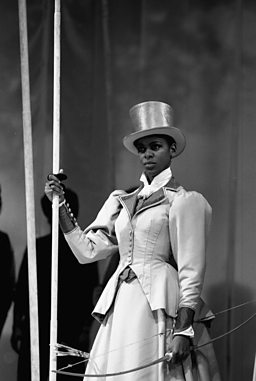 Robert Mountford in the title role in the 2015 Tara Arts production of Macbeth. Image: Talula Sheppard. 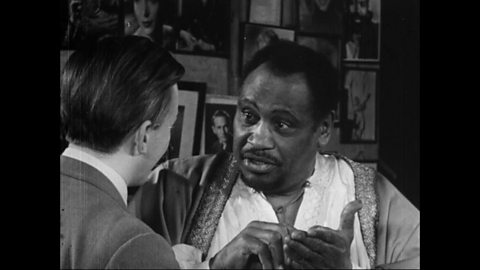 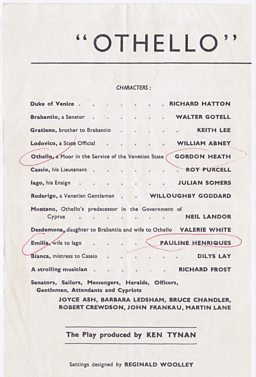 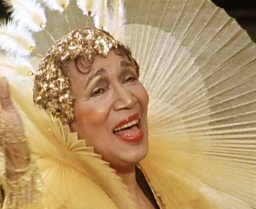 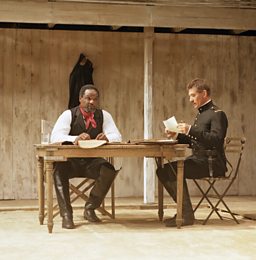 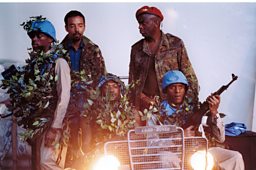 Out of Joint's 2004 Macbeth is set in a war-torn modern Africa. Image: John Haynes/ Out of Joint. 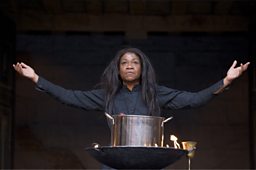 Karen Bryson in a performance of Macbeth from 2010. Image: Manuel Harlan.

Macbeth and the three witches from the Tara Arts production, 2015. Image: Talula Sheppard.