There are 17 species of penguin scattered across the southern hemisphere. They range from the South Pole to the Galapagos Islands, 6000 miles away.

Penguins can survive some of Earth's most extreme conditions.
The Wonder of Animals

The largest of the penguins, the emperor, can survive temperatures lower than -70°C, dive to depths of 550m and hold its breath for up to 20 minutes.

Penguins may not be able to fly, but they have more feathers than any other bird. Up to three times the amount, densely packed at more than 80 per square inch.

It is an extraordinary thought, but even in the depths of the South Pole’s winter, penguins must avoid overheating. Temperatures in the centre of a huddle can reach up to 37 °C, more than 80°C warmer than the outermost layer of the group. In order to maintain a constant body temperature and to prevent overheating in the huddle, the penguins will shuffle between the centre and the outer layer and despite the appearance of each member touching one another; optimum huddle conditions have another surprise. The penguins keep a distance of about 1cm from each other to allow air trapped in their feathers to act as an insulating barrier, keeping the penguins warm despite the bitter cold. 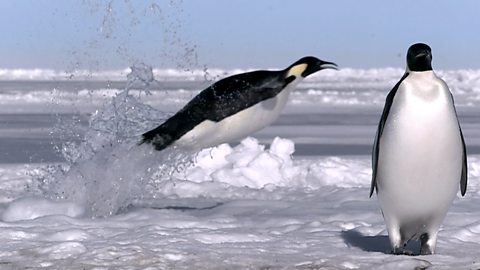 How emperor penguins are able to launch themselves out of the sea.