Orphee, a poem by Neil Gaiman

Orpheus was a musician. He made songs. He knew mysteries. One day the panther girls high on wine and lust came past and tore him flesh from flesh. His head still sang and prophesied as it floated down to the sea. 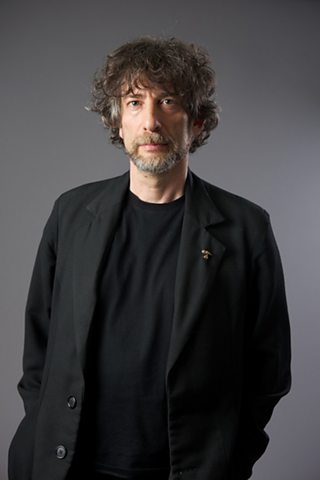 There was a girl, and he said she was his girl. He followed her to Hell when she died. You could do that when your girlfriend dies: there are entrances to Hell in every major city: so many doors, who has time to look behind each one?

When Orpheus was young he got the girl back from Hell safely. That’s where the years came from. Euridice comes home from Hell and the flowers bloom and the world puddles and quickens, and it’s Spring.

But that was never good enough.

I would go to Hell to see you once more. There’s a door on the third floor of the New York Public Library, on the way to the men’s toilets, by the little Charles Addams gallery. It’s never locked. You just have to open it. I would go to Hell for you. I would tell them stories that are not false and that are not true. I would tell them stories until they wept salt tears and gave you back to me and to the world.

So Orpheus came back and carried on, because he had to, and he made magic and sang songs. He taught that there was only truth in dreams. That was one of the mysteries: in dreams the veil was lifted and you could see so far forward you might as well have been looking back.

Some die in Washington DC or in London or in Mexico. They do not look forward to their deaths. They glance aside, or down, or they look back. Every hour wounds. That was what she told me. Every hour wounds, the last one kills.

And looking back now, she’s standing naked in the moonlight. Her breast is already blackening, her body a feast of tiny wounds. Izanagi followed his wife to the shadow lands, but he looked back: he saw her face, her dead face, and he fled.

I dreamed today of bone-white horses, stamping and nuzzling in the bright sunshine, and of orange poppies which swayed and danced in the spring wind.