Kate Benton: "We have all the different types you can imagine like dried blood, old blood, washable blood, mouth blood, eye blood, all of those things!"

Kate Benton is the hair and make-up designer for The Last Kingdom. After beginning her career at the BBC, she has worked on films such as Hugo, Clash of the Titans and Love Actually and TV programmes ranging from comedy to period drama.

Can you tell us how you began to create the overall look for this series?
I think the overall design of the show, which Nick Murphy was very keen on, was to have two very distinct tribal identities so that an audience could easily distinguish between who was a Saxon and who was a Dane. Very quickly we established that the Vikings were sexier, more flamboyant, had tattoos, beards, big flowing locks with braids, whereas the Saxons would be quite pious, contained, their hair would be tight and neat. Nick was keen that the Saxon women’s hairstyles were to be braided underneath their chin, which would be neat and practical.

Is this based on research?
It’s not really based on research, as ultimately who really knows what they looked like. There are things that we did research and use, for example the warrior Vikings would shave their teeth into points, mark and rub red berries into them so when they went into battle they had these fierce red teeth. They would also rub black paint over their eyes. So the look was very mask-like and this was something we were able to use for some of our characters.

He had a very simple braid in his hair to keep it out of his eyes whilst he’s killing people!
Kate Benton

How did you come to design the Viking warrior Ubba’s look?
Rune Temte who plays Ubba, was keen that his character was depicted as a fighter and a warrior and therefore we discussed the practical side the design in detail. Ubba is a man who would simply want his hair to be out of the way so the braiding is very much a Viking trait and the colours we used matched his costume. He had a very simple braid in his hair to keep it out of his eyes whilst he’s killing people!

Uhtred has a scar on his face, why does he have this?
Uhtred’s scar is one that has to tell the story of his capture as a young boy when he gets this awful clump on the face from Earl Ragnar. We had a scar made for Young Uhtred, which then followed through to older Uhtred. We wanted to make him look like he has lived a life and we wanted to be able to add scars as we went along so we put little ones in various places as he goes along as well as a couple on his body. 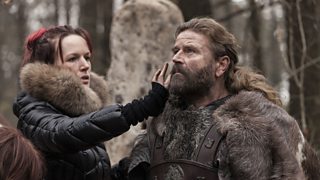 What was the look you wanted to give Brida?
Brida is a tomboy and a tough girl who has been through the same awful experiences as Uhtred. Emily wanted something very low-maintenance, with absolutely no make-up whatsoever. As she becomes more Viking we change her hair to make it more of a Viking style.

What kind of materials would people have been using in these times as make-up or face paint?
I think that the Vikings, although everyone thinks of them as incredibly dirty, were actually probably cleaner than the Saxons. They had combs, they had ear picks and all sorts of things and they bathed. I think the make-up that they used would have been more about going into battle and frightening your enemy rather than for beautification.

What would a big battle sequence day mean for your team?
We would take a box of scars in case the director suddenly said he wanted a big slash on a character. We would also take a big box of dirt and blood; we have all the different types you can imagine like dried blood, old blood, washable blood, mouth blood, eye blood, all of those things! I remember shooting one particular big battle day with Nick when the actors were all really going for it. There were horses everywhere, with lots of Saxons and Danes and it was a complete mud bath! The mud was really sticky as it had rained two days before; I remember going to put a wound on an actor and losing my boot in the mud and having to be pulled out because I was stuck. 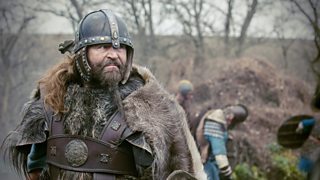 Is it a continuity nightmare?
We have the script supervisor there to make sure that things stay consistent, but really it’s a case of working out the sequence of it all. On the battle scenes in particular they tend to shoot in sequence so you’re not having to go back and forth but sometimes it’s simply a case that you have to clean off and re-do. We are always armed with a lot of wet wipes, towels and water just in case!

Was there any existing reference to King Alfred that you used?
There is reference to King Alfred but one of the main things that the director was keen on was that we’re not tied to history. We’re not tied to a certain look, or somebody’s version of what that would have been. One of the things that we did know about Alfred was that he probably suffered greatly from Crohn’s disease and his awful stomach pains were as a result of this physical illness. So he would have been possibly slightly paler, underweight with sores on his face; all sorts of things that we would try and use with his character.

Martyn John used images of Lenny Kravitz for inspiration for the production design, have you used any similar inspiration?
Our mood board for the Viking characters was a very contemporary selection. The shaved sides of hair and the beards, if you walk through Soho today you will see a lot of guys looking like that! I love that mix of old and new and making it work, as that’s exactly what we wanted. The tattoos also wouldn’t be out of place in a bar in Soho!

Did you get much information from the scripts about the characters and how they look or did that come from your own research?
For me, it’s a mixture of reading the script, of talking to people, doing my own research, talking to costume and much more. It’s such a collaborative process to get a look together. It can be quite a stressful day when you test the actors as the ideas you have in your head, until you see the actor in person you aren’t sure if it’s going to work or look good, if it’s going to work with costume, is the director going to like it, is the actor going to like it; it’s such a collaborative and time pressured process which happens not that much in advance of filming so you really have to be prepared to adapt.