Movie Tine! A celebration of forks in films

Forks! They are very much the middle child when it comes to cutlery. Not as dangerous as a knife, not as sexy as a spoon.

But, as a recent edition of The Origin of Stuff indicated, there’s more to these be-tined marvels than you would initially think. And that’s before you recognise their vital contribution to popular culture.

That’s right, forks have popped up and enjoyed cameos in a number of notable movies. As the following list illustrates…

Ariel, the mermaid in this 1989 animated Disney classic, discovers a fork in a sunken vessel and considers it one of her most precious treasures. 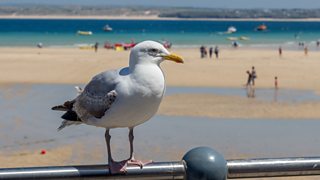 Scuttle, a gull who claims to be an expert on all things human, identifies the object as a ‘dinglehopper’ and explains it’s used to comb hair, which causes a bit of embarrassment at a dinner party later on.

Surely one of the most iconic fork moments in cinema occurs during the early phase of this British classic when, after 60 hours of sleeplessness thanks to a variety of toxic substances, Richard E Grant’s Withnail attempts to do the washing up.

Faced with a wretched sink full of filth and excessive waves of paranoia, the perceived detection of a rat or other living entity clambering up the plughole is met with a lusty cry of ‘FORK IT!’. Though he appears to be holding a comb at the time.

Spoiler alert: Nothing gets forked.

Rather more sedate than the drug-induced machinations of Withnail is the delicate dance of bread rolls (the rolls are the feet, the forks are legs) performed by comic master Charlie Chaplin in his 1925 film The Gold Rush - now considered one of the most iconic moments in cinematic history.

The scene has been referenced endlessly including by Johnny Depp in Benny & Joon, Amy Adams in The Muppets and even Grandpa in The Simpsons.

Chaplin is also reported to have performed the table dance for Picasso when he met him in the 1950s.

This 1999 cult classic presaged the current obsession with superheroes by a good number of years (which might explain why it unfairly bombed at the box office) and featured a number of fairly inept crime-fighters with a plethora of mediocre superpowers.

Why we should give a fork about our cutlery 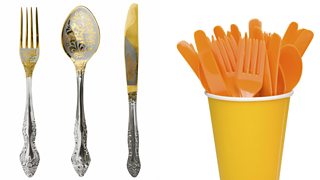 "Gastrophysics" - the various factors that affect the way we taste.

One of these was The Blue Raja (played by Simpsons mainstay Hank Azaria) who had the ability to hurl cutlery at any villain that came into range. His speciality was forks, though his accuracy was suspect and dining items tended to end up in the backsides of his allies.

We’re talking the original (and probably the finest) Muppet Movie from 1979 where Kermit and Fozzie criss-cross American amassing the core members of their theatrical troupe.

While tootling along in Fozzie’s 1951 Studebaker and singing the undeniable banger Movin’ Right Along, Kermit consults a map and tells his bear companion to turn left at the fork in the road.

And what do they see? That’s right! A giant fork in the road!

A dad joke worthy of Fozzie himself. According to the internet (so, you know) the director still has the giant fork in his garage.

No, not this kind of 'fork' in the road.

And Now For Something Completely Different

Before Holy Grail and Life of Brian generated plaudits and controversy in equal measure, the Monty Python team's first foray into film was this sketch compilation from 1971. 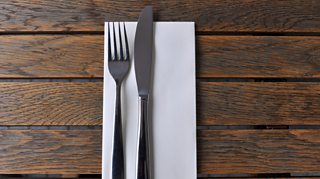 With re-filmed items taken from the first two series of the British comedy staple, it was intended to break the team in the American market.

It didn’t. But it did contain the Dirty Fork sketch, where Graham Chapman’s polite request for cleaner cutlery ends in despair, horror, murder and some postmodern breaking of the fourth wall.

This Is Spinal Tap

Forks don’t always have to be the pointy eating devices. There are other varieties. And one of these features in a memorable scene from an absolute comedy classic.

Spinal Tap bass player Derek Smalls is passing through airport security but keeps activating the alarm. One possible suspect, a tuning fork, is thought to be the culprit.

But as he continues to draw suspicion he reluctantly removes a foil covered cucumber from down the front of his trousers.

Cue much hilarity from the rest of the Tap.

It’s a question as old as the ages. What about sporks? It’s a tricky area. But we’re feeling generous and so we’ll give sporks their due.

What about sporks? It’s a tricky area.

Disney has dipped into the spork well fairly extensively in recent years. WALL-E discovers a spork while he’s left to clean up the deserted, rubbish-strewn Earth. But does he file it with his collection of spoons or forks? You’ll have to watch the film to find out.

And in the brand new Toy Story 4 we meet a character called Forky, who is actually a spork who doesn’t believe he’s a toy. Lots of identity problems there then.

There’s a bonus for fork lovers in this 1988 comedy great. Steve Martin’s character, in the guise of the socially-challenged monster Ruprecht, while engaged in causing mayhem at a posh dinner party, carries a large trident (for unidentified reasons) and also has his dinner fork corked ‘to protect himself and others’.

Forks! The forks did it! Sort of.

This 1945 Hitchcock masterpiece is best known for its dream sequences designed by Salvador Dali.

What is the best tool to eat with? 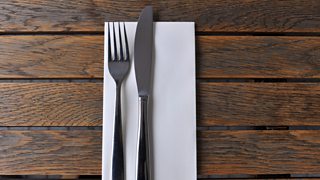 From using your hands to cutlery.

Gregory Peck’s character is suffering from amnesia and also seems to have a distinct dislike for forks, specifically straight lines drawn by a fork on a white tablecloth.

But surely no one could dislike forks that much? Of course not! Turns out it’s all to do with snow and skiing and murder. But not forks. Forks are fine.

Pretty Woman, the beloved 1990 rom-com, features not only some great fork action but an important etiquette lesson. 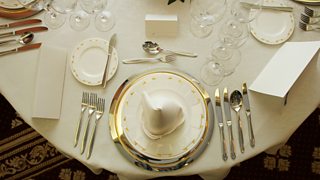 Down on her luck lady of the night Julia Roberts is accompanying slick businessman Richard Gere on various social engagements, but fears she’s a little low-class to be a suitable companion.

She’s given a quick lesson in dinner table manners and the right fork to use for the right course. If in doubt, count the tines! A very important lesson that can apply to many, many things in life.

Close Encounters of the Third Kind

Never has mashed potato been so lovingly sculpted and been so symbolically significant.

But what does he use to render this invaluable plot point? A fork of course!