With many TV series it’s an easy matter to name an individual who can be said to have created the show. Gene Roddenberry is famous for holding that honour in terms of Star Trek, for instance, whilst Tony Warren dreamt up the original characters, ethos and environment that gave the world Coronation Street back in 1960.

The list goes on… But curiously, Doctor Who isn’t on the list. In fact, no-one even knows for certain who came up with the show’s name and the fact that this simple nugget of information remains unknown is entirely appropriate. No individual can be held aloft for creating the phrase ‘Doctor Who’, just as no individual can be applauded as the show’s originator. 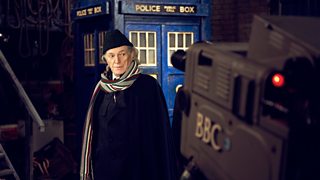 In The Runaway Bride the Doctor and Donna watch the creation of the planet Earth. It begins with a relatively small element that becomes the core of the planet… Rocks and dust and debris and all sorts of stuff add to this kernel, slowly building a world. A planet that isn’t formed from one source but a thousand. A million. Too many to count!

The creation of Doctor Who finds a parallel with that beginning. The core of the idea dates back centuries. A hero traveling to fantastical far-off places to battle monsters and fight for justice whilst encountering what many would see as magic. It’s as much Arabian Nights as it is The First Men in the Moon.

The idea of a weekly series leaving its audience with a cliff-hanger pre-dates BBC TV and can be found in cinema serials such as Buck Rogers in the 25th Century whilst the notion of time travel has been embedded in popular fiction for hundreds of years, not just finding favour in the more obvious science fiction of say, The Time Machine, but embraced by a huge audience in tales ranging from Dickens’ A Christmas Carol to It’s a Wonderful Life. These romantic staples formed the core of Doctor Who… but what added to this to create the show we know today?

After the BBC spotted a gap in the Saturday teatime schedule, Canadian Sydney Newman championed the idea of a science fiction show to fill it; he also recruited Verity Lambert as producer and was firm that ‘Dr. Who’ should not resemble previous BBC dramas. He was keen that it should be thrilling and popular with all ages whilst retaining an authenticity and credibility. In that respect, he envisaged the tenor and tone of the series.

A glance at the timeline reveals other names that were involved in the show’s inception. It would be a stretch to consider any of them to be the father or mother of Doctor Who, but they were all there at its birth and certainly helped with the delivery… Donald Bull, Alice Frick and John Braybon all contributed to reports that assisted in the show’s early development. The crucial idea that the Doctor’s time machine should be able to travel in space and in all kinds of matter (essentially necessitating the notion of the ship’s materialisation and dematerialisation) can be traced back to Donald Wilson.

Many of Bunny Webber’s ideas and sense of how Doctor Who should operate came to fruition and it’s interesting to note that early paperwork gives him a co-credit in terms of writing the show’s first episode. Anthony Coburn enters the history books in style with his onscreen credits as the man who wrote the first four televised episodes.

Although the debut episode might be considered a team effort, the story about the Doctor facing the Tribe of Gum stemmed from Coburn’s vision alone, although it’s clear that David Whitaker (the show’s first script editor and therefore enormously important) and Verity Lambert had a significant involvement in its eventual realisation.

Coburn’s story saw the Doctor, his granddaughter and their unwilling companions flung back in time to a point in Earth’s history when cavemen were savage and the ability to create fire could be the difference between life and death. As with many other science fiction serials that pre-date it, Coburn allows all the characters to speak the same language, allowing the plot to move forward with more that grunts and mimes to pass between our heroes and their enemies. Although episodes 2-4 of Doctor Who lack the wild creativity of the opener, Coburn still slips in some nice touches. The skulls lit by flickering flames provide some memorably visual moments and the bickering, conflicting dynamics between the four central characters gives the drama added bite.

In this first story the Doctor retains much of the selfishness that some had thought would work for the figure; producer Verity Lambert disliked the notion – even more overt in the pilot – and fought to make him a more sympathetic character – an idea made real and advocated by William Hartnell himself. Lambert also championed the Daleks when Newman was very much in the anti-BEM camp. Without that second adventure, it’s hard to see how Doctor Who would have developed as it did and so that story’s writer, Terry Nation, Raymond Cusick (who designed the Daleks) plus Waris Hussein, Richard Martin and Christopher Barry who directed the first two serials, must all be added to the roll call of people who pioneered Doctor Who.

Other icons of the show were the work of talented individuals including Peter Brachacki who designed the interior of the TARDIS, Ron Grainer who wrote the theme tune and the extraordinary Delia Derbyshire who realised it.

This multiplicity gave Mark Gatiss certain issues to address when writing An Adventure in Space and Time, the story of Doctor Who’s origins. He commented, ‘This is a drama not a documentary and though it’s extremely painful to have to leave out some people who played a huge part, it makes dramatic sense. You simply can't do everyone justice in 90mins. For instance, the story of how Terry Nation and Ray Cusick created the Daleks is almost a film all on its own! Jeff Rawle plays Mervyn Pinfield, who was the Associate Producer, and his character sort of absorbs several others including Donald Wilson and the brilliant David Whitaker – the first script editor - whose contribution was immeasurable.’

Since those early days, Doctor Who has continued to evolve. Sometimes in small ways but occasionally with huge, tectonic shifts of imagination… Regeneration! The Time Lords! The Time War!

And although the Doctor endures as one of fiction’s most written about characters, he retains much of his original enigma, a hang-over, perhaps, of the mystery that surrounded him in those first few years.

Half a century on from a pair of school teachers finding a mysterious box in a junk yard, the travels of an ancient alien continue to enthral and delight. Like those two teachers, we may never discover the answer to the show’s eponymous question, but one thing remains certain. In those cold, monochrome months leading to November, 1963, many writers, producers, directors and other TV folk became alchemists, turning a set of adventurous ideas into something immortal, strangely beautiful and quite magical.

And our ‘open sesame’ was a six-word phrase that even today conjures up a sense of marvellous, scary excitement… “And now on BBC1… Doctor Who!”