Is your smartphone making you less productive?

By Simon Mundie, presenter of the Don’t Tell Me The Score podcast

There's no question that people carry much of their lives around with them on their phones. They make everyday things like working remotely and internet banking all the more accessible. But smartphones are also a seductive invention that can steal your time without you even being aware of it.

Your phone could even be training you to be more easily distracted, says visual skills coach Dr Sherylle Calder. She helped England lift the Rugby World Cup in 2003 and South Africa win it in 2007, so she knows what she’s talking about.

In my Don't Tell Me the Score podcast, Sherylle Calder tells me she has no doubt that smartphone usage is having a really serious effect, including on top international athletes.

"We see that in elite sports there's a decline in skills. We notice players get off the training field and the first thing they do is go on their phones. We weren't designed to do that. They're multitasking by reading stuff and going from Twitter to Facebook. They have deteriorating memory, spatial awareness and attention span,” she says.

If you're using a smartphone, you are being distracted between 2000 and 4000 times a day.
Sherylle Calder

So if phone use is having that effect on professional rugby players, what about the rest of us? A recent report by OFCOM claimed that people spend nearly three hours a day on their phones, and four hours for those aged 15-24.

"We are training ourselves to be distracted. We've done work in big banks where the productivity is declining, because people are being distracted all the time,” says Dr Calder.

“If you're using a smartphone, you are being distracted between 2000 and 4000 times a day. Twenty years ago, no one was doing that, so we're having information overload. We call it digital cocaine. It's frightening."

As the OFCOM statistics suggest, young people spend even more time scrolling on their phones. Sherylle Calder works in schools where she says she notices reading and comprehension skills are in decline. For children in particular, time used for scrolling would be far better spent outside, developing motor skills and “eye-hand coordination”, as she calls it.

"If you climb up a tree and don't grab something correctly with your hand and fall, you learn a lesson,” she says. “Playing outside is one of the greatest things you can do for your kids. Let them stumble over something, walk on a wall or climb over a fence – it builds all those motor skills that are really important."

Dr Calder has developed a programme to counter the effect she believes mobiles are having – she calls it “eye-gym”. It is a visual training system designed to help make quicker and smarter decisions; she says actually training the eyes is crucial in the modern world.

But for those of us who are looking for simple and easy-to-implement ways to minimise the potential damage smartphones might be having, Sherylle Calder has these tips:

1. Take digital time-outs. Consciously turn your phone off for a certain time each day.

2. Hold your smartphone further away, ideally at arm’s length.

3. Regularly look away from your digital device. Look outside and at the furthest points you can see.

4. Be aware of things around you while using your phone so you are not glued to the screen for long periods.

5. Check your screen time and set goals to spend less time on screens.

What can sporting success teach us about ordinary life? 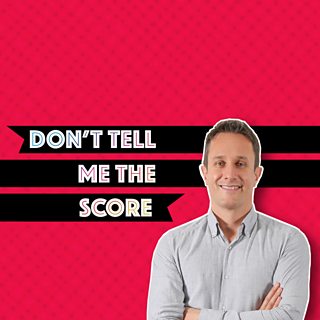 Simon Mundie talks to experts about the deeper aspects of sport. Download Don’t Tell Me The Score