David Bowie amassed a large art collection, a fact that he largely kept private. Now, as many of his works go up for public auction in London, this hidden side of one of our greatest performers is revealed. BBC Arts explores five key paintings in the collection, alongside Bowie's own insights.

Bowie’s passion for art began long before he achieved musical stardom. A student of art and design in school, his collection began at the age of 21. Some of his early acquisitions included paintings by Tintoretto and Rubens.

It’s time for someone else to enjoy them
Beth Greenacre, David Bowie's curator

He created paintings of his own, and in his free time devoured books about artists, becoming incredibly knowledgeable - he was even brought onto the invite-only editorial board of Modern Painters magazine in 1994, a position which allowed him to interview renowned artists from all over the world.

As his success grew, so did his collection. It eventually required the employment of personal art curators who would assist him in discovering new works and also in copious lending to galleries. Beth Greenacre, who discusses working with Bowie in the film above, filled the role for the last 16 years of Bowie's life and has been a key figure in bringing the Bowie/ Collector exhibition and sale at Sotheby’s into being.

Over 350 works by modern and contemporary artists go under the hammer at Sotheby’s in London on 10 and 11 November, including 200 pieces by many of the most important British artists of the 20th Century. These include paintings by Frank Auerbach, Damien Hirst, Henry Moore and Graham Sutherland. 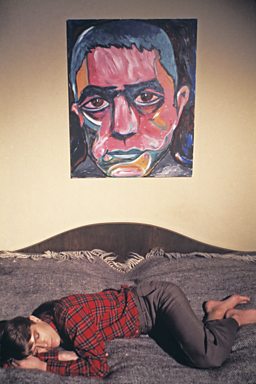 David Bowie at home in Berlin, February 1978. Above him is Bowie’s own portrait of the Japanese author Yukio Mishima, painted in 1977 | Getty Images