Tell us a bit about yourself?
I'm a British, Pakistani, Muslim, European woman, a journalist, a storyteller and I dabble in stand-up comedy. I'm a professional nomad! I've spent more than ten years working across the Middle East including Palestine, Lebanon, Iraq and Syria, Yemen with a number of international aid organisation gathering stories. I've had the absolute privilege and honour to meet incredible people and tell their stories. It’s something I never take for granted. 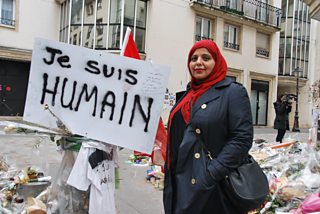 I am a storyteller; I wanted to hear people's stories.
Shaista Aziz

Where were you when the attacks in France took place?
I mostly live and work in Pakistan these days. I was in the capital Islamabad, in my office when I heard about the attacks in Paris. I walked into the office and my colleague had the TV on, there was grainy footage taken from the rooftop of the building that housed the Charlie Hebdo magazine. At first I didn't understand what was going on - it took a while for the horror to sink in.

What was the reaction there?
Horror and dismay were the immediate reactions from the people around me and from the mainstream media in the country. In Pakistan, people live under the shadow of terrorism every day; we sadly know only too well what it means to be the victim of a terrorist attack. Our journalists are attacked for doing their jobs and face extremists threats on a regular basis. Blasphemy is a big issue in Pakistan; many people have lost their lives to extremists. The extremists have hijacked the discourse and space for debate - there is little middle ground for the rest of us - yet despite this we carry on.

Why did you want to make this documentary?
I was approached by the BBC whilst I was working in Pakistan's tribal belt interviewing people who had been forced to flee their homes due to the Pakistan Taliban attacking their villages and homes, and the subsequent army operations to remove terrorists. Most of the people I met were women and children, forced to live in tents with little protection against the bitter winter, the children didn't even have shoes.
I was intrigued by the concept of the film; I wanted to find out more about the situation in France and the impact it has had on French Muslims. I wanted to make a film that tackled some of the big questions that we are being faced with every day, a film that looks at race, identity and what it means to be a Muslim. I am a storyteller; I wanted to hear people's stories.

You have worked in stand up. What do you think are the limits of humour?
Yes, I dabble in stand-up comedy and I'm writing a sitcom and new comedy material reflecting my experiences of travelling the word as a visible Muslim woman who usually ends up in the middle of most things. For me, humour is a very important part of my life, I have always used humour to process the things I've seen and heard and to do my job, I need a good sense of humour. For me freedom of speech is important — but nothing is absolute including freedom of speech — it carries a responsibility. We are all responsible for our words and actions.

Humour should be funny - it’s that simple but what one person finds funny, someone else may not find funny. We are living in a dangerous time where people are more polarised than ever before. I think humour and laughter brings people together. It's certainly a powerful thing.

What was the most surprising thing you learnt during the making of this film?
The hurt and anger people feel, their sense of being stigmatised and the discrimination they feel is very deep and painful for them. I felt it in the voices of the people I interviewed and sadness from many interviewees.
I also found it surprising how popular the far right are becoming amongst young people, people under the age of 35.
The world is changing at a rapid pace; some people are finding it hard to accept this. We can be more than one thing at one time. I am British, I am European, I am a Muslim, I am Pakistani and I am a woman; these are just some of my identities.

Who was the most memorable person you met?
I had the absolute privilege of meeting some wonderful people and characters - they all stood out for different reasons, I met some very strong young women trying to make sense of some very big issues - I guess they stick in my mind the most.

What were the biggest challenges making this film?
The subject matter! It's not an easy issue to tackle.....And it was very, very intense! Hearing stories that make your head and mind boggle day in day out for four weeks is exhausting! We worked very long hours on this film and it wasn't always possible to find light moments - so when we found those moments - we grabbed them with both hands and latched on to them. It was a gruelling process making this film, but it was a huge privilege to be asked to work with a great team of professionals and to be trusted with people's stories, it's a big thing.

How did you feel about the images of the prophet Mohammed?
I don't like the cartoons, for me, as a Muslim. They're provocative and offensive. There is context behind everything and these cartoons have a context. I do not believe anyone has the right to kill anyone or take anyone’s life, and the fact people were killed in the name of my faith, Islam, there are no words for me to adequately describe how it makes me feel. I am beyond disgusted and outraged at the killings. Standing outside the Charlie Hebdo office and the spot where the police officer Ahmed was killed was very moving and very disturbing.