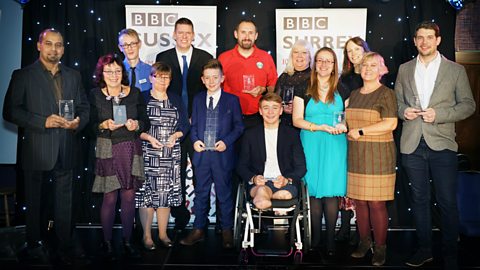 Unsung heroes from Surrey and North East Hampshire were honoured at our special ceremony.

We have great pleasure in announcing this year’s finalists in our annual Community Heroes Awards, held in conjunction with BBC Sussex, which are now in their seventh year. Once again, we were bowled over by the incredible standard of entries received, so a big thank you to everyone who made a nomination.

All of our finalists will attend a special ceremony on Monday 20 November. We will then update this page with photographs of the event and details of the overall winners in each category. You will also be able to hear a special programme of highlights on Sunday 26th November 4-5pm (repeated on Christmas Day and New Years Day 6-7pm)

So, here they are…

This group of ninety volunteers are on call to the police every day of the year whatever the weather, to search for, find and rescue high risk, missing vulnerable people in Surrey.

They recently attended their 500th incident and have received The Queen's Award for Voluntary Service.

These two officers successfully dealt with a terrifying ordeal, where a man was on a sixth floor balcony, threatening to harm both himself and his baby. They managed to restrain the offender and the baby was brought to safety.

PCSO Gibbons has been serving the Shepperton community for almost eleven years, where he is extremely well-known and liked. Colin is relentless when it comes to identifying offenders and has recently supported vulnerable people as lead PCSO for a Domestic Abuse project. The project has been so successful that it's now being rolled out across the force, with Colin playing a key part in making it happen.

Happy Paws rescues mainly Golden Retriever dogs from countries such as Cyprus, Turkey and Romania. Most of these dogs have been in kill shelters or abandoned as families move and simply discard their unwanted pets. All dogs are fostered in a network of families and nursed back to health.

Sue Baumgardt is a retired teacher. Sue is passionate about animal welfare and has spent the last seven years helping to rehome organic free range hens at the end of their time on a farm in Ditchling. Single-handedly, she has found new homes for over 45,000 hens!

Tarnya Knight has worked selflessly for over 17 years, giving up her free time to provide round the clock care to injured, orphaned and sick wild animals. Despite this immense undertaking, Tarnya also works full time for an international wildlife charity. Tarnya's work covers a substantial area of 780 square miles.

Enid Chamberlain has been nursing for over 60 years, including within the community District Nursing Team. She works part time running the Hove Leg Ulcer Clinic and is now aged 80, with no plans to retire just yet. Enid supports vulnerable patients in her care and helped to establish and maintain the Portslade Community Group, offering a host of activities such as tea dances.

June Rasburn is the escort on a bus for children with special needs and looks after the youngsters, with all their complexities, as if they were her own. She is so caring, efficient and good humoured in spite of whatever life throws at her.

Anna Dwyer provides unfaltering care to her husband Liam who was diagnosed with Motor Neurone Disease in 2005. Anna has fought hard for better facilities for both Liam and for other people with disabilities. Although she is his lifeline, she rarely makes her presence felt.

Over the past thirty years, The Guildford & Godalming Fundraising Group of the British Heart Foundation has raised in excess of £11 million. This money has supported the Cardiac Unit at the Royal Surrey County Hospital, the local community and helped to provide vital research into Cardio Vascular Disease.

Daryl Farmer rowed 2,978 miles on a solo Atlantic row to raise money for the Wildlife Rescue Ambulance Service run by a former Community Heroes Awards winner Trevor Weeks. This was a fantastic achievement for this extremely modest hero, taking 96 days and testing him to the limit.

Jean Fawley has been a long-serving fundraiser for the Royal British Legion. What makes her particularly special is that for the last two years, she has battled breast, kidney and bone cancer but despite being unwell, she has continued to fundraise and take part in a range of activities.

This small high street store goes above and beyond the call of duty, helping customers who have no one to turn to. This year, they launched a Community Support Scheme, donating a domestic appliance or electrical item to either a local customer in need or a charity. They have so far donated over £4,000 worth of goods and services!

Brighton & Hove Impetus's Neighbourhood Care Scheme is a scheme which matches volunteer befrienders with older people, people with physical and sensory disabilities, and their carers. In the last year, the scheme enabled 294 volunteers to make 7,745 visits and provide 11,933 hours of emotional and practical support to over 300 isolated individuals.

Philomena Jassim and her husband run a kiosk at the foot of the Downs in Eastbourne. She has time for everyone who visits, taking time out for people on their own or in low spirits, supporting those who are ill and fostering positive friendships between the people she meets.

Rhythmix is a music, social welfare and education charity, working with some of the most vulnerable people in Sussex and Surrey. Rhythmix believes in the power of music and culture to transform people's lives. In the space of a year, the group raised almost £500,000, enabling them to work with over 5,000 people.

For the past three years, The Dance Movement, a not-for-profit dance company, has teamed up with Farnham Town Council to create and choreograph an innovative large-scale, open air dance performance. It involves over 100 children of varying abilities from up to sixteen local schools, who wear amazing handmade costumes.

Tom Salway is described as "an inspirational teacher, mentor, roadie, gig buddy and above all, a true friend". He has been nominated posthumously for his amazing community work, not least with a group of disabled musicians called Delta 7. Sadly, Tom died in August just two weeks before his 25th birthday but his legacy will live on forever.

Care provider Surrey Choices provides a range of activities for the people it supports but it cites Rebound Therapy as one of its most popular. Using trampolines, the team works with people with learning disabilities, physical disabilities, sensory impairment, people with complex needs and those on the autistic spectrum.

Les Kempster is the current President of Sussex County FA and Chairman of The Mid Sussex Youth and Minor Football League in Sussex. Les has been volunteering in grassroots football since the 1960s. Les is now 93 but there's no stopping him in his efforts, which have already helped thousands of young players to experience the beautiful game.

Ben started 'Sussex to Africa' in 2007, after he visited Zambia and experienced first-hand how donating sports kit can change a community. Over the past ten years, it is estimated that he has sent well over 150,000 pieces of kit to many different communities in twelve different African countries.

Jill Shuker could arguably be described as Miss Horsham! From Healthy Walk co-ordinator to Waste Prevention Advisor and the Samaritans, there can't be many Horsham initiatives that Jill isn't involved with. She is also joint founder of the Horsham Repair Cafe, alongside previous Community Heroes Awards winner Carrie Cort, sharing crafts, knowledge and creative skills.

Diana Game voluntarily arranges meals for over fifty elderly people every Wednesday at a local church hall. Diane sources the food from a local supermarket, who have agreed to supply Diane with low cost food. Together with a team of helpers, Diana produces amazing meals, complete with entertainment such as Bingo or a gentle exercise class.

Five years ago Ali Ghanimi set up Free University Brighton to provide free educational events run by the community for the community, open to everyone whatever their background or financial means. Since then, hundreds of people have attended courses, practical workshops, lectures, talks, film screenings, discussions and debates.

Shabek Ali works full-time as a taxi driver, but spends every spare minute raising funds and providing help and support to the homeless. From delivering home cooked food to taking in donations of clothes, Shabek "lives and breathes to help those in need".

Last year, when he was just 14, Alfie Gates embarked on his dream to be a sports presenter and started writing football match reports for Woking FC. In the same year, Alfie became the volunteer press officer for Leatherhead FC and has built up an impressive team of camera operators, editors and reporters. Alfie is described as “a wonderful role model”.

The charity Challengers is dedicated to providing inclusive play for disabled children and young people. In September, the charity suffered from a devastating fire that caused significant damage to its Guildford premises. The Young Play Worker team on duty were incredible, evacuating all children to safety in a very difficult and stressful situation.

A mother from Yateley managed to make almost a full recovery from a massive stroke thanks to the actions of her quick thinking 10-year-old son. When his mum collapsed, Jack Randall kept calm, alerted neighbours and comforted a two year old foster child. He undoubtedly saved his Mum's life.