These two camera techniques can be easily confused. Read about the key differences and see some examples here.

Timelapse is a filming technique used to speed up events revealing a new visually interesting image. Typical subjects include clouds forming, traffic streaming along a road, or plants growing. The essence is to capture an image at an interval that best reflects what is changing in front of you. For filming a cloud you might shoot one frame every two seconds. 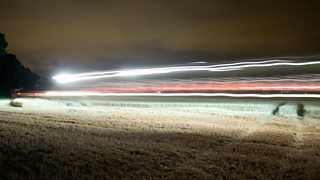 When placed together and played in a sequence at a standard television frame rate the resulting image appears to be speeded up. It is often used for meteorological events but in The Great British Year it was also used to show people in the context of a continuously changing country.

A timestudy is a variation on the same theme. On The Great British year we used this technique to show changing areas of the country over longer periods of time than with a simple time-lapse. For example a rapeseed field over the course of a year from ploughed earth to first young shoots, blooming yellow flowers and finally harvested pale stubble. The key to this technique is being able to shoot from the exact same position time with the same camera/lens/tripod every time.

There are various ways to achieve this, ranging from a fixed scaffold pole to fiddling around with lots tape measures. Its very easy to get it wrong. A timestudy can be filmed at a normal frame rate and then the sequences of shots that are taken are mixed together to show the changing field.