The read through for Last Christmas took place on Wednesday, 3 September, 2014, and the main shoot started less than a week later on Monday, 8 September. The episode was directed by Paul Wilmshurst, previously at the helm for Kill the Moon and Mummy on the Orient Express and it’s the fifth Christmas Special written by Steven Moffat. 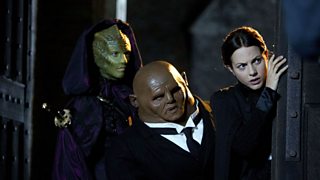 Dan Starkey starred as Strax (centre) in the 2012 Christmas Special, The Snowmen.

This is the eleventh episode of Doctor Who to premiere on 25th December and the tenth Christmas Special since the show’s return in 2005. Only one episode debuted on Christmas Day during the twentieth century – The Feast of Steven, which was the seventh part of the 1965/66 adventure, The Daleks’ Master Plan. At the close of that episode the Doctor says, ‘Incidentally, a happy Christmas to all of you at home!’ The audio to this greeting was used in a BBC trailer broadcast on the run up to Last Christmas.

This is the third Christmas Special in a row starring Jenna Coleman as Clara. It’s also the third in a row to feature Dan Starkey although he has played different characters in each of those festive adventures… 2012 saw him in the familiar guise of Strax for The Snowmen whilst 2013 found him playing two (different) Sontaran warriors; in Last Christmas he’s Ian, the slightly belligerent elf.

The song we see Shona dancing to is Merry Xmas Everybody – originally a hit for Slade, written by band members Noddy Holder and Jim Lea. It got to number one in the UK singles chart on 15 December, 1973 – the same day Sarah Jane Smith made her debut and the Sontarans first appeared during episode 1 of The Time Warrior. The song can also be heard in The Christmas Invasion (in Mickey’s garage) and The Runaway Bride.

Professor Albert is played by Michael Troughton whose father, Patrick Troughton, was the Second Doctor. Michael’s brother is David Troughton who has appeared in several stories, most notably starring as Professor Hobbes in Midnight and King Peladon in the Third Doctor adventure, The Curse of Peladon. 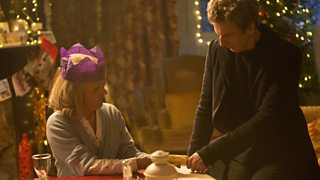 ‘Old Clara’ and the Doctor pull a cracker in Last Christmas.

The opening titles have been given a festive tweak! There is snow on and around the TARDIS as it spins into view, meaning the three most recent episodes of Doctor Who have each featured slightly different versions of the title sequence.

Nick Frost’s character is called Santa Claus, a name derived from Saint Nicholas, a 4th Century bishop who, it is said, liked to give gifts secretly. You can read more about Saint Nicholas in the BBC’s News pages.

The Doctor helping ‘Old Clara’ to pull a Christmas cracker echoes a scene in The Time of the Doctor where she gives the ancient Eleventh Doctor a hand with a cracker as he’s grown too feeble to manage it alone. And the moment where he says, ‘Don’t salute me!’ brings to mind Death in Heaven where, after Ahmed salutes him, the Doctor snaps back, ‘Oh, don't do that! You look like you’re self-concussing…’

When Ashley declares, ‘God bless us, every one!’ she’s quoting Tiny Tim, one of the main characters in Charles Dickens’ 1843 novella, A Christmas Carol. 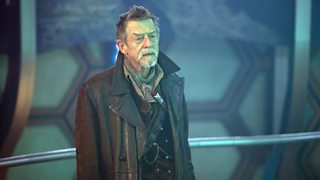 John Hurt as the War Doctor in The Day of the Doctor.

Alien, the 1979 science-fiction classic directed by Ridley Scott, is name-checked during the ‘dream scenes’ and is on Shona’s list which she reads when she’s free of the Kantrofarri’s influence. The movie starred John Hurt, who played the War Doctor over thirty years later in three Doctor Who adventures. The other two films on Shona’s list are The Thing from Another World (a 1951 flick directed by Christian Nyby in which scientists find a crashed alien spaceship in the Arctic) and Miracle on 34th Street – the popular tale of a man claiming to be Santa, although the list doesn’t note which version – the original or remake – Shona intends to watch. Ghostbusters (Ivan Reitman / 1984) is also referenced when the famous question is asked: ‘Who you gonna call?’ The Tenth Doctor quoted that exact line in Army of Ghosts and in Hide, Clara claimed that she and the Doctor were ghostbusters!