Were the ancient Egyptians guilty of a terrible fashion faux pas?

After closing time in the museum children discover that people have been wearing socks and sandals for centuries.

Think of the extraordinary artefacts of ancient Egypt and you might picture the mask of Tutankhamun, mummified bodies and ... a stripy sock?

It's perhaps not the grandest item from ancient history, but this remnant of everyday life caught the attention of a group of children roaming the halls of the National Museum of Scotland. And it posed several questions, most notably: Should socks and sandals ever be worn together? 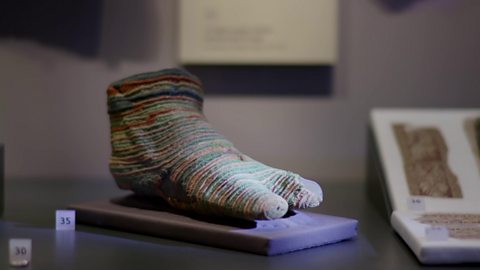 The boys ponder the purpose of an ancient Egyptian sock

Adam, Caleb and Euan discover an ancient item of clothing.

The boys were among a lucky few given unprecedented access to collections after closing time in new series One Night in the Museum.

Left to their own devices and without adult supervision, they were free to investigate or ignore whatever they chose. The children have been raised in an era where the wonders of the world can be discovered at the touch of a button, so what would they find interesting in the museum?

The sock, dating from 300-600AD, was one of the items to catch their eye and spark debate. Perhaps it wasn't a sock but a shoe for poor people, they pondered, or maybe it was a sock worn only by the wealthy.

Either way, they reckoned, it would involve some very smelly ancient Egyptian feet!