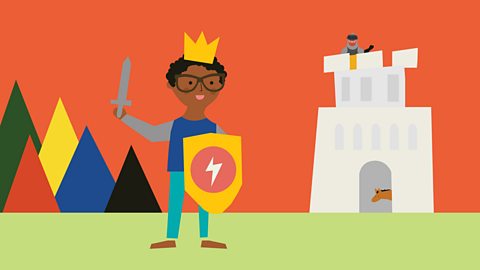 In the year 1203, there lived a clumsy and skittish young squire called Dave. Dave wasn't so brave, as all future knights are supposed to be. He was just very happy to sit, knitting nice warm, woolly jumpers for the chilly villagers, rather than compete in terrifying tournaments. Dave's dream was to have a shop and sell his amazing jumpers to villagers and even to the king!

On one especially bitterly, cold day, Dave made his way to the village farm, where the fearsome sheep 'Woolly' lived. Dave wanted to knit some warm jumpers and needed Woolly's thick, woolly wool to make it. Woolly was an especially angry sheep, with a very short temper indeed. He'd had quite enough of Dave's clumsy attempts at shearing and head-butted him into the icy-cold, stinky bog. Poor Dave's teeth chattered in the toad-infested water, while he waited until big, bad bully Woolly had finally gone home for his tea.

Dave scrambled his way out among the green slimy water, when he felt a sharp, pointy object sticking into his soggy, woolly sock. To his great surprise, Dave pulled out a very shiny diamond sword! "Oh my goodness!" he exclaimed, "What is this beautiful sword doing at the bottom of this very pongy pond?"
Clumsy Dave slipped and slid, often on his bottom, out of the cold, sludgy mud. He was determined to keep the sword safe. Dave knew that it could help him on his quest to become the bravest knight and more importantly, the most famous jumper knitter in all the land! As he squelched and sloshed along the steep, stony path, Dave noticed a sign. It read:
"Brave wannabe knights wanted to fight world sword fighting champion, Sir Steve Strong. Report to Sideburn Castle immediately! Winner will be rewarded!"

Surely, with his new sword, Dave would defeat Sir Steve. He could have enough riches to buy everything he had ever wanted, including his own sheep; no more dealing with grumpy old Woolly! Dave stumbled on towards the castle. The tournament had already begun and Sir 'scary' Steve Strong was there slicing away with his sword! Nobody stood a chance against him!

Suddenly, it was Dave's turn. Taking a large gulp of air, probably his last, the young squire drew his sword. The crowd roared but suddenly fell silent. The king finally spoke, "Dave, where did you get that sword?" "At the bottom of a bog, your Majesty." Dave replied sheepishly. The king wiped away a tear, "This sword is mine. It was taken by my archenemy, Ruthless Robin . I thought it was lost forever!"

With that, the king held up both Dave's hand and the diamond sword. The crowd cheered, "Hooray!" Taking the sword and knighting him on each shoulder, the king shouted " Arise Sir Dave! How can I ever repay you?" "Well..." said Dave, "l'd quite like my own shiny sword, one just right for a super brave knight like me! Oh, and a nice flock of extremely woolly sheep!!