Meandering timelessly as they do through hundreds and sometimes thousands of miles of landscape, it's not surprising that rivers attract stories, myths and legends.

Rivers may sparkle in the sun, but can be full of dark shadows; they can be crystalline or murky, the perfect place to hide things, to swim... or to drown.

To mark Radio 3's Along the River season, featuring Radio 3 Breakfast's journey down the Severn, here are five potent watery myths from around the UK and continental Europe.

1. The Legend of Sabrina

The name Sabrina derives from the Roman title for the river we know as the Severn. 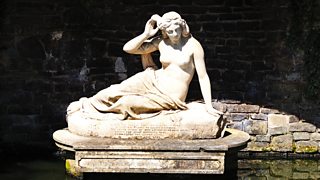 The 12th-Century writer Geoffrey of Monmouth, who structured the Arthurian legends, recounted the story of King Locrine who dismissed his wife Guendolen and their son Maddan, and recognised Sabrina, daughter of his mistress, the German princess Estrildis.

Enraged by her treatment, Guendolen raised an army which defeated her husband in battle.

She ordered Sabrina and her mother to be drowned in the river, which would be named after her so that Locrine's betrayal would never be forgotten.

In legend, Sabrina continues to live in the river – she is depicted riding in a chariot with dolphins and salmon as companions.

The potent idea of women whose beauty and alluring songs cause mesmerised seafarers to shipwreck themselves stems primarily from Greek mythology. 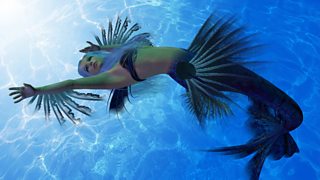 But the story of the ancient Sirens received a 19th-Century reboot when the German poet Clemens Brentano introduced Lore Lay in his 1801 ballad Zu Bacharach am Rheine.

This femme fatale, abandoned by her lover, is accused of bewitching men and causing their deaths; but on her way to the nunnery to which she has been banished, she falls to her death after climbing the Lorelei (lit. ‘murmuring rock’), a 400-foot slate outcrop in the Rhine Gorge at St. Goarshausen in Germany.

According to legend, she lives on in this, the most narrow and dangerous part of the river, luring sailors in this area to their deaths by singing, much like the Greek Sirens did; however, it is said that she looks like a modern-day mermaid.

3. The Merman of Orford

To this day, the Suffolk village of Orford, which lies on the banks of the River Alde and Ore, has as one of its defining symbols the image of the Merman of Orford. 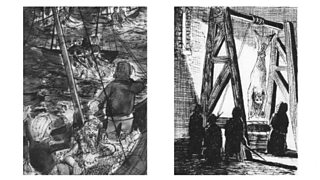 Illustrations by the late Richard Power

The legend was written down by the 12th-Century abbot and chronicler, Ralph of Coggeshall:

"Men fishing in the sea caught a wild man in their nets. He was naked and was like a man in all his members, covered with hair and with a long shaggy beard. He eagerly ate whatever was brought to him but if it was raw he pressed it between his hands until all the juice was expelled. He would not talk, even when tortured and hung up by his feet.

"Brought into church, he showed no signs of reverence or belief. He sought his bed at sunset and always remained there until sunrise. He was allowed to go into the sea, strongly guarded with three lines of nets, but he dived under the nets and came up again and again.

"Eventually he came back of his own free will. But later on he escaped and was never seen again."

4. The Queen of Cadzow

The armorial insignia of the City of Glasgow by tradition contains the following elements: "Here is the bird that never flew; here is the tree that never grew; here is the bell that never rang; here is the fish that never swam." These elements tell of the legends surrounding St Mungo (or Kentigern), the city's patron saint, and first appeared together in a civic seal used from 1488-1540. 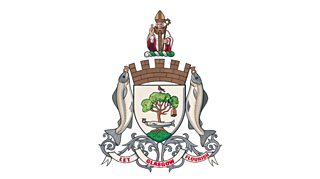 Like so many cities, Glasgow is defined by the River Clyde which flows through it, connecting the city to the trading routes of the Atlantic and beyond, and nurturing a great but now much reduced shipbuilding industry.

"The Queen gave the ring to a knight and the King, suspecting an intrigue, took it from him while he slept during a hunting party and threw it into the River Clyde.

"On returning home, the King demanded the ring and threatened Languoreth with death if she could not produce it. The Queen appealed to the Knight who, of course, could not help and then confessed to St Mungo who sent one of his monks to fish in the river, instructing him to bring back the first fish caught. This was done and St Mungo extracted the ring from its mouth.

"The scene is represented on the counter seal of Bishop Wyschard, made about 1271."

5. The Legend of the Rhinegold

In Wagner's "Ring" Cycle of operas, the composer develops his storylines by synthesising characters and plot strands from the Norse sagas and the German Nibelungenlied.

The first opera, Das Rheingold, is set in a world of mythical giants and castles, magic potions and scheming dwarves, and the central toxic influence of the all-powerful ring. The ring is part of a hoard of gold which lies at the bottom of the Rhine, guarded by three Rhinemaidens.

A lecherous Nibelung dwarf called Alberich steals the gold from the Rhinemaidens by renouncing love; he heads to Nibelheim where he builds an empire based on fear and slave labour.

We also meet Wotan, the chief god in his castle Valhalla, which he had built by the giants; he is reluctant to pay them, and when he hears of the Nibelung horde including the all-powerful ring, Wotan decides he wants it for himself, and will use the gold to buy off the giants. Enlisting the help of Loge, he steals the gold from Alberich.

This duplicitous and un-godlike act sets in motion a train of events which will result, at the end of the Cycle's fourth opera, Götterdämmerung, in the destruction of the the gods and Valhalla.

As the waters of the Rhine rush in and close over the scene, the Rhinemaidens are heard celebrating the return of the ring and its gold to the river. 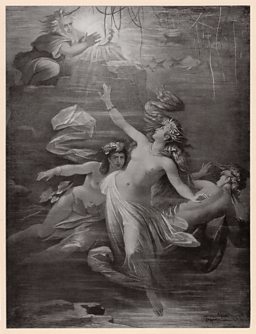 Alberich stealing the Rhinegold from the Rhinemaidens.

Along the River with Radio 3