As Brett Westwood discovers in Radio 4’s Natural Histories, their role as beast of burden for Father Christmas isn’t the only reason to love reindeer.

Reindeer vary in size but all types are surprisingly small.

The largest subspecies of reindeer – the woodland caribou – is about 1.2m at the shoulder, whereas the thickset body and dumpy legs of the Svalbard reindeer make it particularly dinky, standing 80cm (31ins) at the shoulder.

Reindeer have a circumpolar distribution which means they live in and around the Arctic Circle. In some habitats the winter temperatures push close to minus-70 degrees centigrade. In order to survive this extreme cold, reindeer have extra-insulating hollow fur, which covers their entire bodies, from the tips of their noses to the bottoms of their feet. The only external part of reindeer not covered in fur is their eyeballs!

Female reindeer give birth in the spring and it’s thought that keeping their antlers makes them dominant in the herd, helping them to get the best food through the long dark winter.

Reindeer have great big feet and while these give them an endearing clown-like appearance, they are also very useful. They act as snowshoes in the winter and provide stability on the soft ground in the summer.

Reindeer’s hooves also make excellent paddles for swimming and, when the snow comes, their hooves harden and the edges sharpen up making them perfect shovels to shift the snow and get to the food below.

As reindeer walk they make a delicate clicking or popping sound. Being surrounded by a small herd sounds a bit like being in a bowl of puffed rice as the milk is poured on to it. The sound travels well and a large herd of several hundred animals can be heard kilometres away.

The clicking is caused by a tendon in the foot rubbing over bone and is thought to be a kind of contact call. Vocal calls use up more energy and release life-saving heat on the reindeer’s breath, so clicking feet is an energy-efficient way to stay in touch. 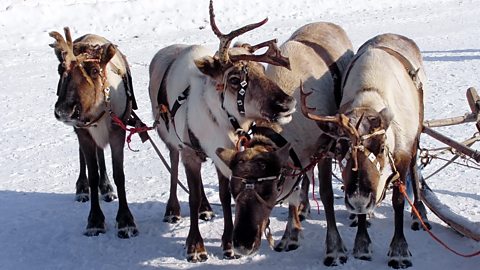 How Santa got his reindeer

Brett Westwood gives the history of Santa's partnership with eight, then nine, reindeer.

Reindeer were a hugely important animal for the Stone Age, hunter-gatherer people of Europe. As the climate warmed and the glaciers of the Ice Age retreated north between 10,000 and 20,000 years ago, the reindeer followed. Rather than change their way of life, small groups of people started following them – embarking on a journey that would take them to the edge of the known world.

These pioneers left records of their association with reindeer on the walls of the caves they sheltered in along the way. The oldest known rock art in the UK is of a reindeer on the wall of a cave on the Gower peninsular in Wales and is between 13,000 and 18,000 years old.

7. … and keeping them there

Until recently, traditional people in some parts of the Arctic wouldn’t have been able to survive in the very north of the world without reindeer. They provided meat, milk, transport and clothing.

Nowadays, many people from traditional reindeer herding societies travel on skidoos, have modern fabrics for their clothes and spend at least part of their year in modern homes. But there are still some who rely almost entirely on reindeer for their survival.

Being quietly surrounded by a herd of relaxed reindeer is a strange experience. Masters of heat and energy preservation, reindeer are almost silent and move in a gentle and deliberate way – only really picking up speed when they are threatened or alarmed.

Reindeer have a calming presence, which might help explain why people were so keen to follow herds right to the edge of the earth.